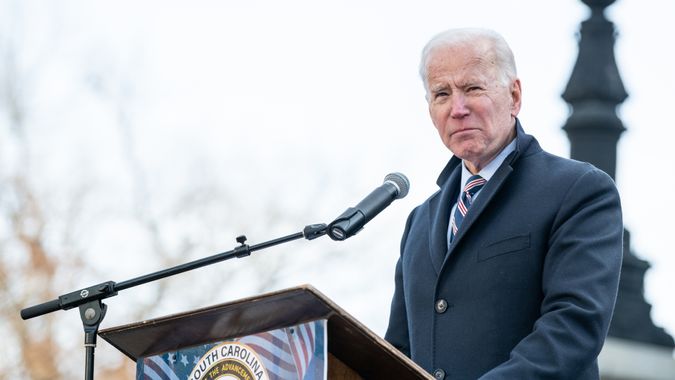 President Joe Biden came into office during both an economic crisis and a global health crisis. Such unprecedented times called for bold, sweeping action, and the Biden administration has made big moves. But with such broad economic policies, it’s not always easy to predict what the real-world impact will be.

Read: A Fourth Stimulus Check Might Be on the Way

Thus, we will take a look at some of the actions the Biden administration has taken and how they will impact the U.S. economy by the end of 2021.

The American Rescue Plan Act of 2021 is one of the Biden administration’s biggest economic initiatives. The cost of the plan was $1.9 trillion and it contained several key elements, including $300 weekly unemployment supplements and $1,400 direct payments to individuals. Those were the benefits that gained the most notoriety, but other benefits included emergency paid leave for 106 million Americans.

The plan comes at a time of a historic economic crisis and it will help hundreds of millions of Americans survive economically for a few more months. But it could have other potential consequences, like an increase in inflation. For example, economist Oliver Blanchard expressed his concerns in a tweet: “If it were to happen, it would lead to strong inflation (not the 2.5% that some predict, but potentially much more), and, likely a strong reaction of the Fed to limit the overheating, a very large increase in interest rates, again far more than is currently priced in.”

But not all economists agree. Alan Detmeister, an economist at UBS, said that inflation due to the American Rescue Plan is “likely to be small.” Others agree with Detmeister, leaving economists split on whether significant inflation is likely.

The Impact of Eviction Moratoriums

Biden has taken steps to delay evictions during the pandemic. The latest moratorium extended the ban on foreclosures to June 30; it had been scheduled to end on March 31. The ban was intended to prevent people from losing their homes and moving into shelters or relatives’ homes. Thus, we can slow the spread of the virus by preventing more crowded living arrangements.

Although slowing the spread of the virus may help the economy recover more quickly, some experts have raised concerns about the economic implications of eviction moratoriums. “The rapid rise in home prices over the past year has led to some concerns that a housing bubble is being rapidly created,” said Kenon Chen, EVP of corporate strategy for Clear Capital.

“However,” Chen continued, “the record low inventory of homes for sale (less than half of what was available a year ago — 47% in March — based on our data) and the robust purchase demand driven by historically low mortgage rates are still creating a recipe for continued home price strength. Had the GSE and FHA moratorium on foreclosures and evictions been allowed to expire March 31, we might have seen the unfortunate rise in foreclosures, which could result in additional properties finding their way to the market post-foreclosure.”

Light at the End of the Tunnel?

Americans are now receiving COVID-19 vaccines at a rapid pace, with over 150 million doses already administered. Although daily new cases have still remained over 50,000 most days in the U.S., the blistering pace of vaccination provides hope that the pandemic will soon be firmly under control.

More: How Biden’s Plan To End Coronavirus Is Impacting the Economy (So Far)

And that is a good thing, not just for public health, but for the economy, too. Indeed, some experts say that there will not be a full economic recovery without the pandemic fully under control. “If the pandemic is largely under control we will likely see a robust economy — one that will rebound from the devastation of the pandemic — irrespective of any measures taken by lawmakers in D.C.,” said Robert Johnson, chairman and CEO at Economic Index Associates. “On the other hand, if the virus (and new strains of the virus) are prevalent, we will likely see a continued struggling economy.”

Although some states have lifted many of their restrictions, we will inevitably see restrictions around the country until the virus is eradicated. Thus, only when the pandemic comes to an end can we expect a full economic recovery. Hopefully, that end will come sooner rather than later.