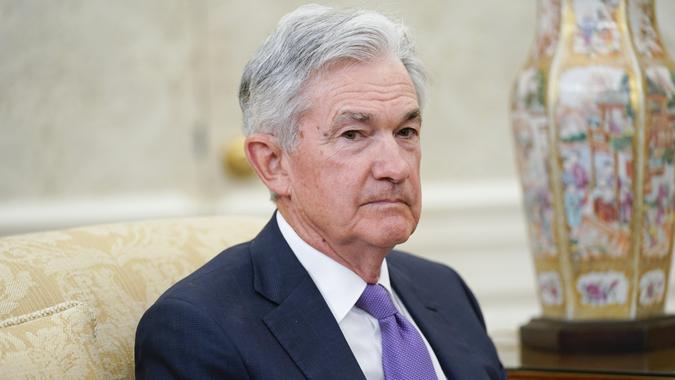 The Fed’s Federal Open Market Committee (FOMC) is meeting today and June 15, and investors are bracing themselves for a potentially faster and steeper rate hike, as inflation data was worse than expected — hitting 8.6% in May.

See: How Much Did Inflation Increase the Price of Bacon, Bread & Eggs in May?
Find: How Much More Did Gas & Electric Cost You in May?

Following the Consumer Price Index (CPI) release last week, several analysts and Wall Street insiders believe the Fed will be more hawkish, raising rates by 0.75 percentage points — which would be the first time since 1994, according to The Wall Street Journal.

Edward Moya, Senior Market Analyst, The Americas OANDA, wrote in a note sent to GOBankingRates that “inflation will remain sticky and lead to sharply weaker purchasing power and consumption over the coming quarters, but an immediate deterioration is unlikely and that supports the idea the Fed will be able to move forward with more aggressive rate hikes over the next few meetings.”

Bloomberg reports that while the consensus expectation for the Fed’s interest rate increase at this week’s meeting is a half-percentage point, because of the worse than expected CPI data, banks including Barclays and Jefferies revised their calls for the potential of 75 basis points (bps).

“The May CPI was even firmer than expectations, driven by broad-based price pressures. With little indication that these have peaked, and greater risk of a self-reinforcing inflation dynamic taking shape, we think that the FOMC will want to reinforce its credibility by hiking 75 basis points at next week’s meeting,” Barclays wrote in a report.

Some analysts are even thinking the Fed might push to 100 bps.

“The Fed’s trying to erase any perception that they’re behind the curve,” Steven Englander, global head of G-10 FX research at Standard Chartered Bank told Bloomberg. “Fifty was the big round number six months ago. Meanwhile, 75 is a very middling type of hike. So the Fed might say: ‘Look, if we want to show commitment, let’s just do 100.'”

In addition, Englander told Bloomberg that the Fed reaches for a more drastic increase if it’s compelled to demonstrate a “Volcker moment,” referring to Fed Chairman Paul Volcker, who crushed inflation with a series of historic rate increases, starting in 1979.

Englander predicts there’s a 10% chance of a 100-basis-point increase at the June 15 meeting, with his baseline still a half-percentage point increase, Bloomberg reported.

In a widely anticipated move on May 4, the Fed said it will raise interest rates by half a percentage point and start reducing its holdings of Treasury securities, and agency debt and agency mortgage-backed securities on June 1.

Live Richer Podcast: Why Inflation Is Making Your Paycheck Worth Less
Find: Is Date Night Getting More Expensive? Babysitters, Restaurant Bills, Uber Fares All Rising Due to Inflation

“The invasion of Ukraine by Russia is causing tremendous human and economic hardship,” the Federal Reserve Board’s Federal Open Market Committee (FOMC) said in a statement on May 4. “The implications for the U.S. economy are highly uncertain. The invasion and related events are creating additional upward pressure on inflation and are likely to weigh on economic activity. In addition, COVID-related lockdowns in China are likely to exacerbate supply chain disruptions. The Committee is highly attentive to inflation risks.”