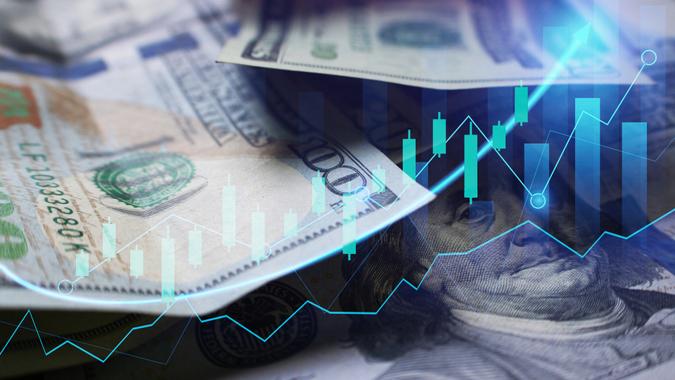 Even amidst rising gas prices for the Memorial Day weekend, the economy may be showing some positive signs, according to new data reported Friday, May 27, by the Bureau of Economic Analysis.

Factoring in inflation, Real DPI increased less than 0.1% and Real PCE increased 0.7%. In all, the numbers were in line with expectations, according to a report from CNBC.com. They were also lower than the 5.2% PCE increase in March.

It’s important to note that the core PCE figure does not include food and energy prices, which have driven inflation to 40-year record highs. When you add food and energy to the PCE, it shows a rise of 6.3%, which is an improvement from March’s 6.6% increase. Additionally, month-to-month the increase was just 0.2% compared to the 0.9% jump between February and March.

The PCE figures are also lower than the consumer price index (CPI) numbers for April, which showed an increase of 8.3% since last year, GoBankingRates.com reported earlier this month. The Fed uses the PCE as its preferred inflation gauge since it tracks data directly from businesses, giving a broader-based measure of U.S. prices.

POLL: Do You Make a Weekly Meal Plan or Other Regular Household Budget?
Discover: Consumer Price Index: How Much Did Inflation Increase the Price of Bacon, Bread and Eggs?

Upon the news, the Dow Jones Industrial Average opened up 52 points and continued to climb for a 95 -point gain just minutes after opening, a 0.29% increase from the previous day’s close. The S&P 500 also gained 0.8%, while the Nasdaq Composite opened up 1.4%. The stock market looks like it may be set to reverse course after an 8-week downward spiral.