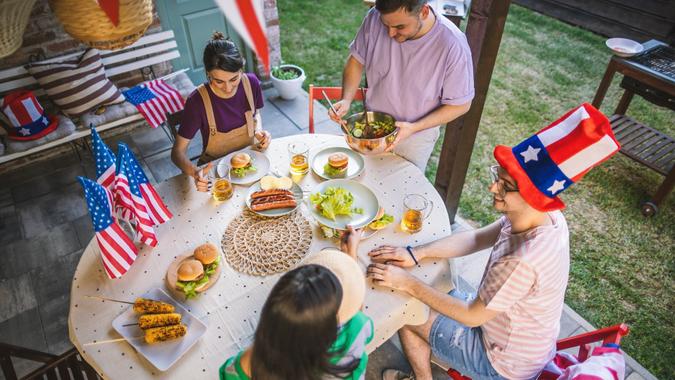 Your July 4 barbecue will be 17% more expensive this year, due to a 41-year high inflation, supply chain disruptions and the war in Ukraine, according to the American Farm Bureau Federation (AFBF). This number comes in contrast with the estimated 21% increase posited by the Political Calculations blog, which utilized AFBF data as well as current Walmart pricing.

See: Where To Use SNAP Benefits This Summer
Find: Social Security Changes That May Be Coming for 2023

The AFBF — the nation’s largest general farm organization — released its marketbasket survey on June 28. The data provided indicated that the average cost of a summer cookout for 10 people is $69.68, which breaks down to less than $7 per person and includes cheeseburgers, pork chops, chicken breasts, homemade potato salad, strawberries and ice cream, according to a press release.

The marketbasket survey shows the largest single year-to-year price increase was for ground beef, up 36% from last year.

Several other foods in the survey also saw sharp increases from a year ago. They include:

One bright spot for consumers is the average retail price for strawberries, which declined by 86 cents (-16%) compared to a year ago, while sliced cheese and potato chips also dropped in price — by 48 cents and 22 cents, respectively (-13% and -4%).

The Farm Bureau notes that better weather conditions in some fruit-growing regions and greater retailer pricing flexibility for processed products are the likely drivers behind the modest price declines for these items.

The year-to-year direction of the marketbasket survey is in line with the federal government’s Consumer Price Index (CPI) report for food at home and general inflation across the economy, as they both show increases of more than 10% compared to last year’s levels, the Farm Bureau notes.

“The increased cost of food and supplies is a very real concern in our country and across the globe,” AFBF president Zippy Duvall said in the release. “U.S. food assistance programs and food banks help those who struggle to make ends meet here at home, but the story is much different around the globe as food insecurity skyrockets. The big impact of a single event in Ukraine shows how dependent the world is on stable, productive agriculture.”

The survey notes that farmers are feeling the price-point pain, too.

“Despite higher food prices, the supply chain disruptions and inflation have made farm supplies more expensive; like consumers, farmers are price-takers not price-makers,” AFBF chief economist Roger Cryan said in the release. “Bottom line, in many cases the higher prices farmers are being paid aren’t covering the increase in their farm expenses. The cost of fuel is up and fertilizer prices have tripled.”