Money Makes the World Go ‘Round: An International Comparison of Economic Health 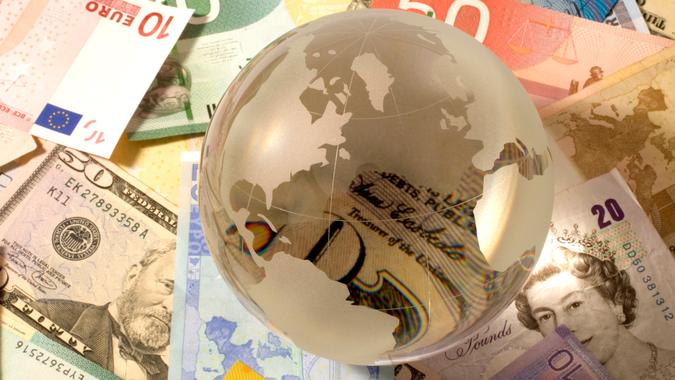 For more than a century, the United States reigned supreme as the largest economy on Planet Earth.  According to the CIA World Fact Book, however, in 2014, after decades of tripling the U.S. growth rate annually, China took the reign at #1 in terms of GDP based on purchasing power parity.

These two countries alone dominate the global economy, with a combined 34.5% of global GDP. Still, there wasn’t an economy on Earth that didn’t suffer mightily during the recession created by the coronavirus pandemic of 2020-21. Although things are slowly turning around, even the U.S. still posted a 6.0% unemployment rate as of Mar. 2021, according to the Bureau of Labor Statistics. This is well above the pre-pandemic rate of just 3.5%.

So, the question remains: How does the U.S. really measure up to the rest of the world?

When it comes to its true place on the globe, America still dominates much of the globe, at least in terms of GDP. However, whereas the U.S. was once a beacon of financial freedom, it no longer appears even in the top 10 countries in terms of economic freedom, according to the Heritage Foundation. Economic statistics show that countries like Singapore and New Zealand have taken that title away from the U.S., while others like China have shown more resiliency in the face of the economic effects of the pandemic.

Find Out: What the Pandemic Has Proven Wrong About How We Viewed Money

A country’s economic health is often measured in terms of Gross Domestic Product (GDP), the market value based on its production of goods and services. In economics, GDP, when measured by an entire population of people, can determine whether a country’s overall standing and standards of living are good or bad.

The good news for Americans is that based solely on absolute GDP numbers, the U.S. remains far and away the #1 economy in the world, at about $21.4 trillion. This is about 50% above second-place China, at $14.3 trillion, and more than quadruple third-place Japan, at just over $5 billion. All data is from the World Bank based on 2019 figures, the most recent for which data is available.

The U.S. Economy and Europe

Believe it or not, the United States’ total GDP value of over $21 trillion is about 35% higher than that of the entire Eurozone, which stands at about $15.6 trillion. Part of this difference is due to the relative outperformance of the American economy over the past decade-plus vs. that of the Eurozone, which has essentially remained stagnant since about 2007 in terms of total GDP output. Although there are 19 member countries of the Eurozone, overall, it consists of a series of countries that have seen better days financially.

According to Global Finance, despite the surpluses, countries that experienced the highest deficits in the world from 2009-2011 were the United Kingdom, the U.S., Ireland and Greece — the latter two experiencing the worst economic downturns on the planet. America, contrary to popular belief, isn’t the first country to experience widespread debt.

The Eurozone at a Glance

Spain was one of the Eurozone countries hit worst by the coronavirus pandemic, with an economy shrinking 11% in 2020. That was the worst showing for the country since its Civil War. In Q2 2020, widespread shutdowns tanked the economy, with output shrinking by 17.8%. A big rebound in the third quarter was stifled by successive waves of pandemic in Q4, when growth shrank to just 0.4%.

Spain is looking to bounce bank in a big way in 2021, on the backs of nearly 30 million euros in economic aid pledged by Brussels. Some estimates have the Spanish economy jumping by a whopping 9.8% in 2021.

By way of reference, the U.K. ranks as the 9th largest economy in terms of GDP by purchasing power parity, with a 2.29% share of the global economy.

Singapore and New Zealand: Countries With the Most Economic Freedom

Singapore and New Zealand are the two most economically free countries in the world, according to the latest rankings from the Heritage Foundation. Singapore boasts an economic freedom score of 89.7 out of 100, and it ranks freest in the world for the second year in a row. Part of the reason for the high ranking is that Singapore is the only country in the world considered economically free in every ranked category, which includes factors centering on four main pillars: Rule of Law (property rights, government integrity, judicial effectiveness), Government Size (government spending, tax burden, fiscal health), Regulatory Efficiency (business freedom, labor freedom, monetary freedom) and Open Markets.

New Zealand is not far behind Singapore, ranking second with a score of 83.9. At 74.8, the United States now ranks #20 in the world on this list.

China: Most Resilient Economy in 2020

Perhaps surprisingly, China was the only major world economy to post gains in 2020, expanding by 2.3% according to the Wall Street Journal. The country’s GDP rose by 6.5% in 2020’s fourth quarter, representing the country’s best year-over-year quarterly growth in two years.

Draconian shutdowns early in the pandemic helped China squash down the virus within its own borders, allowing it to regain its economic footing more rapidly. The International Monetary Fund projects that China will expand its economy by 8.1% in 2020, besting both the global estimate of 5.5% and the 5.1% the IMF expects to see out of the U.S.

The U.S.: Turning the Corner?

The U.S. was certainly walloped hard during the early days of the pandemic, but it’s been on a steady upward climb ever since. After unemployment spiked to record levels of 14.7% in Apr. 2020, according to the Bureau of Labor Statistics, it has declined in nearly every month since and sits at 6.0% as of Mar. 2021.

The stock market seemed to realize that the pandemic would be a sharp, short-term hit, as it fell 30% for the fastest time in history before climbing out of the shortest bear market ever just 33 days later.

A flood of stimulus money has certainly helped the economy regain its footing. Six major bills, with perhaps more still in the works, have showered the economy with about $5.3 trillion in government funds. Support for small businesses to the tune of about $968 billion, along with another $856 billion in economic stimulus payments and $764 billion in expanded unemployment compensation have led the way, according to data from the Peter G. Peterson Foundation.

According to the Organization for Economic Cooperation and Development, a global economic recovery is in sight, but the speed of vaccine distribution will play a critical role. Global GDP growth projections have already risen by a full 1% since just Dec. 2020, thanks to increased vaccinations, and it’s possible that global output could reach pre-pandemic levels by mid-2021.

Over the short term, the scales could tip in the favor of the United States, which has surpassed the U.K. in terms of the number of doses given per 100 people, with the rest of the world far behind.