President Donald Trump is now having a change of heart about the United States’ involvement in the North American Free Trade Agreement.

After having a “pleasant and productive” conversation with Prime Minister Justin Trudeau and President Enrique Pena Nieto via phone, Trump said that he agreed to renegotiate, rather than terminate, the agreement at this time.

NAFTA — which eliminates tariffs on trade between the U.S., Mexico and Canada — has been in place since 1994. In particular, the deal affects trade in agriculture, cars and clothing. Since it was signed into law, trade with Canada and Mexico has totaled $1.3 trillion, according to the U.S. Commerce Department.

So how does NAFTA affect the U.S. economy?

The U.S. Chamber of Commerce estimates that nearly 14 million American jobs depend on trade with Canada and Mexico. On Wednesday, Arizona Republican Senator John McCain said a U.S. exit from NAFTA would “devastate the economy in my state.”

Mr. Trump has made his disdain for NAFTA clear long before entering the White House. Throughout his presidential bid, he called NAFTA a raw deal for the Middle Class, notably blaming it for the loss of good-paying manufacturing jobs in the rust belt.

Last week in Wisconsin, he said NAFTA has “been very, very bad for our companies and for our workers.” He also said he planned to make “very big changes, or we are going to get rid of NAFTA once and for all.”

Trump must give 90 days’ notice before formally entering negotiations to reform NAFTA, according to CNN. Mexican leaders are eager to finalize negotiations before the country’s presidential campaign heats up ahead of the July 2018 election.

Trade experts say completing a new agreement by the end of this year or early 2018 is unlikely.

Not everyone sees the value of a trade deal with our neighbors to the north and south. Some studies show NAFTA has only had a modest positive impact on the U.S. GDP. The deal has also been blamed for American job losses and some companies relocating to Mexico, according to a 2016 study by the Wharton School of Business.

Both the peso and Canadian dollar were climbing on Thursday as a reaction to the NAFTA negotiation news.

Up Next: 7 Stocks That Have Soared Under Trump’s Presidency 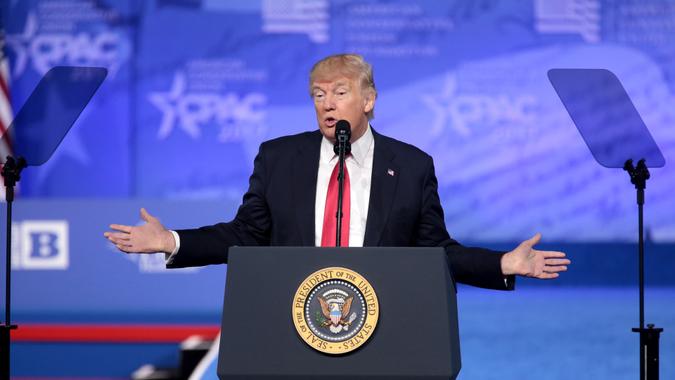 These are a few of the numbers that have defined President Donald Trump's first 100 days in office.