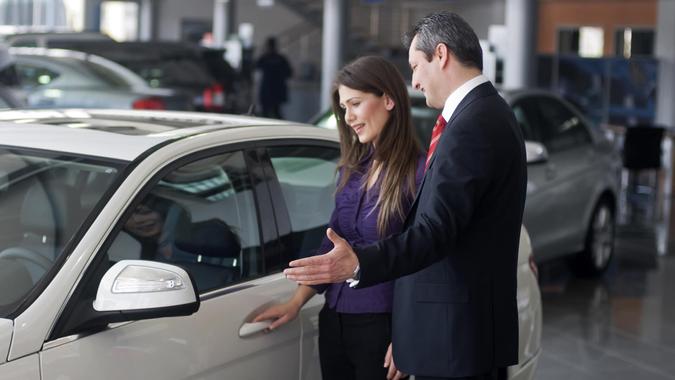 Planning to hit a car dealership soon to find and the perfect set of wheels? You better move quick. A shortage of new cars caused by supply-chain disruptions has created a run on available vehicles — so much so that eight in 10 car buyers are willing to pay above the sticker price to land the right one, according to a new report from Edmunds.

Learn: The 29 Biggest Car Mistakes That Will Cost You
See: What To Do If Your Car Is Repossessed

“The fact that an overwhelming majority of consumers are paying above sticker price would have been unthinkable even just a year ago,” said Jessica Caldwell, Edmunds’ executive director of insights. “This is in part driven by affluent consumers being willing to shell out more cash to get the vehicles that they want, but there’s also a vast population of individuals who are being forced to do so simply because they need transportation and have no other choice.”

As previously reported by GOBankingRates, a combination of problems — from a shortage of microchips and raw materials to plant shutdowns and a lack of workers — has contributed to a mass shortage of vehicles that one industry researcher pegged at more than 7 million worldwide.

Explore: Plan Ahead for These Supply Chain Issues That Will Affect Your Wallet in 2022
Related: How Are Big Businesses Reporting Record Profits When Inflation Is So High?

The smartest course of action is to hold off purchasing a vehicle until the market returns to normal, experts say. That’s not practical for consumers who need a new car right now, however. Ivan Drury, Edmunds’ senior manager of insights, offers the following tips to snag the best deal: