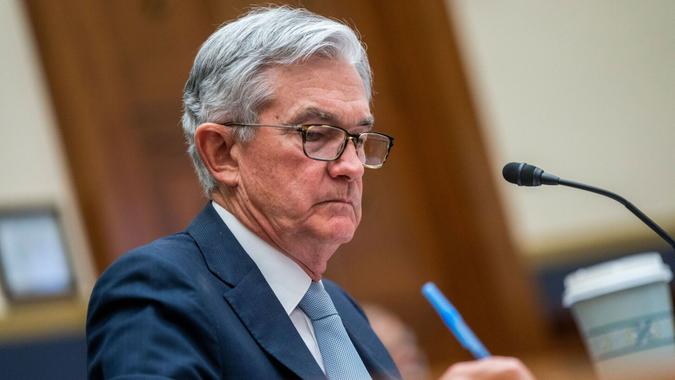 Federal Reserve Chairman Jerome Powell said it will be “appropriate” to raise the target range for the federal funds rate at the central bank’s meeting later this month. He also addressed Russia’s attack on Ukraine, saying that while the conflict is causing tremendous hardship for the Ukrainian people, “the implications for the U.S. economy are highly uncertain, and we will be monitoring the situation closely,” according to prepared remarks for his testimony before the House Committee on Financial Services.

See: Does Your Portfolio Contain Exposure to Russia, and Will It be Impacted by the Ruble Crash?
Find: IRS Raises Interest Rates Just Ahead of Tax Day — How Much More Will You Pay if You Owe Money

“The near-term effects on the U.S. economy of the invasion of Ukraine, the ongoing war, the sanctions, and of events to come, remain highly uncertain,” Powell said in his remarks. “Making appropriate monetary policy in this environment requires a recognition that the economy evolves in unexpected ways. We will need to be nimble in responding to incoming data and the evolving outlook.”

Powell also described the labor market as being “extremely tight,” as “employers are having difficulties filling job openings, an unprecedented number of workers are quitting to take new jobs, and wages are rising at their fastest pace in many years.”

He added that inflation increased sharply last year and is now running well above the Fed’s longer-run objective of 2%, while bottlenecks and supply constraints are limiting how quickly production can respond.

“These supply disruptions have been larger and longer lasting than anticipated, exacerbated by waves of the virus, and price increases are now spreading to a broader range of goods and services,” he said.

Inflation rose again in January, with the Consumer Price Index for All Urban Consumers (CPI-U) increasing 0.6%, bringing the overall inflation to 7.5%, according to a recent U.S. Bureau of Labor Statistics report.

Discover: Economists Keep Saying This Isn’t 1980s Inflation, But What Does That Mean?

Edward Moya — senior market analyst, The Americas, OANDA — wrote in a note sent to GOBankingRates that Powell’s prepared testimony has confirmed the March rate liftoff for the Fed and that “the balance sheet runoff will commence in a predictable manner primarily through adjustments to reinvestments.”

“Powell acknowledged that the Ukraine war’s impact on the U.S. economy is highly uncertain. It is possible that the war in Ukraine could lead to intensifying inflationary pressures that could lead to much more aggressive Fed tightening if growth does not fall off a cliff,” Moya wrote. “Powell’s position with the labor market being extremely tight and inflation ‘well above’ target has not changed. The Fed will move forward with rate hikes and the balance sheet runoff, but they are getting concerned about the risks to the outlook.”

“But he notably said that they underestimated the supply related causes of inflation and that there are some aspects that the Fed has no power over, then commented that the Fed could look at a half-point hike down the road if inflation does not ebb in due course,” Ricci continued, adding that “according to Fed funds futures, the probability of a 50 basis points rate hike in May is now higher than in March.”

According to Ricci, the markets like the talking point “that they have to crack down on inflation to ensure a prolonged economic expansion that will, in turn, support a strong labor market.”