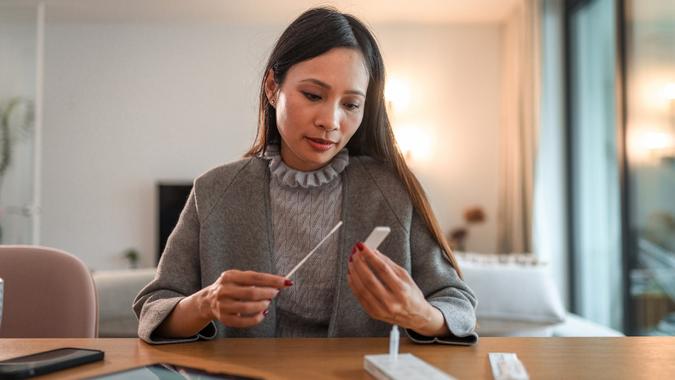 A pair of U.S. lawmakers are urging the Federal Trade Commission to investigate price gouging over COVID-19 tests amid a rise in cases and hospitalizations tied to the Omicron variant.

Learn: Are Face Masks and Hand Sanitizer Tax Deductible?
Explore: 400 Million Free N95 Face Masks Are Being Dispensed — Here’s How To Get Yours

“The demand for these test kits by Americans concerned about their health, trying to protect friends and family from infection, or in need of a negative test for work, travel, or child care, has led to supply shortages and empty shelves across the country,” Blumenthal and Markey wrote in the letter. “These conditions are unfortunately ideal for predatory and profiteering behavior, including the sale of fraudulent test kits or charging exorbitant prices for those that are available.”

The letter urged Khan and the FTC to “be vigilant and respond immediately to any such illicit activity,” and noted that a number of state attorneys general and the media have reported price gouging involving consumers who attempt to buy at-home test kits, “including being charged double or triple the regular retail price of the product.”

Last month, New York Attorney General Letita James issued a consumer alert over potential price gouging after getting complaints that some at-home tests were going for up to $70 per package, CBS News reported. The U.S. Food and Drug Administration has also warned consumers about the risk of buying fraudulent tests.

“We can think of nothing more unfair, deceptive and harmful than the exploitation of public health concerns for profit during a global emergency … we strongly urge the FTC to act as necessary and use its full authority to investigate the situation and hold bad actors accountable without delay,” Blumenthal and Markey said in the letter.

Markey has taken it a step further, writing letters to both manufacturers and retailers urging them to make at-home rapid COVID-19 antigen tests more affordable.

In his letter to manufacturers, Markey called on companies to lower their prices for the tests and cited reports showing that at-home tests can cost as little as $2 each to manufacture but sell for $12 or more, according to a press release on his website. In his letter to retailers, he asked that the tests be sold “at cost” through the duration of the pandemic.

Retirees Beware: Social Security Scams Poised To Increase in 2022 — Brush Up on the Latest Techniques
Find: As Cannabis Is Linked to COVID Prevention, How Can You Invest in the Windfall?

Price gouging complaints mostly came before President Joe Biden’s announcement this week that the federal government will give away up to four free at-home COVID-19 tests per U.S. household. But as GOBankingRates recently reported, the first round of available tests might not last very long due to heavy demand.