QR Codes Are Replacing Restaurant Menus – What Does That Mean for You? 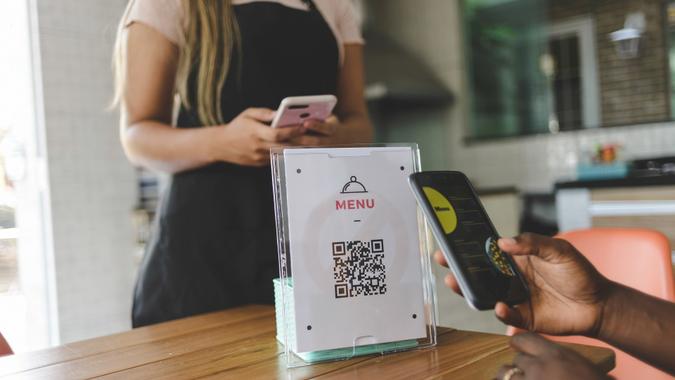 As consumers head out to restaurants, spending in record numbers, QR codes, which allow for easy menu updates and touchless transactions, may have emerged as a permanent replacement for physical menus. Bitly, a link management service, said that it’s seen a 750% increase in QR code downloads over the last 18 months, CNBC reported.

Learn: Taco Bell Adapts to Pandemic, Launches ‘Defy,’ a Contactless Drive-Thru
Find Out: Google’s Advertising Revenue Surges 69% – What Does That Mean For Your Privacy?

“They’re able to adjust their menu offerings on the fly to account for elements like inflation, fluctuations in food and commodities prices, and other variables,” Bitly President Raleigh Harbour.

As GOBankingRates previously reported, July’s consumer price index, the food away from home index rose to its highest point in 40 years, gaining an additional .8% for the month.

There are more opportunities in QR codes beyond the physical menu — such as on receipts for quick and easy payment or to track a customer’s past order. CNBC added that reservation services like OpenTable, SevenRooms and Resy collect data on whoever made the booking to restaurants. However, some are saying that businesses are using QR codes for more than just touchless services.

American Civil Liberties Union, a nonprofit organization, claims that businesses are using these quick response codes to store large amounts of sensitive information about who we are, where we go and what we do. Many QR codes in restaurants are generated by a different company that collects, uses and sometimes shares your personal information with other companies, ACLU noted.

Related: Goodbye, Seafood? Inflation and Shortages Have Restaurants Taking Items Off the Menu

This technology has been widely used in China to track its citizens as they move through society and recently in Australia for COVID-19 contact tracing. In the U.S., ACLU suggested that an advertising-based equivalent could arise and information collected by companies could be shared with or accessed by the government for surveillance purposes.

ACLU also reported that these codes could pose security risks similar to clicking on a link from an unknown email address. QR codes transfer data directly into your device, which could trigger an unauthorized action. Scammers have also been known to stick their own code over a legitimate QR code to steal payment information or direct scanners to a malware site. Malware can comprise your device’s software and share sensitive information.

See: Attention Gen Z: Here Are 9 Ways To Send Money Without Venmo
Find: The IRS Has Released Its Top Scams of 2021 — Here’s What To Watch Out For

In the wrong hands, QR codes can be dangerous to your device’s security and a threat to your privacy.