Recessions Explained: Definition, Warning Signs and What Happens During One 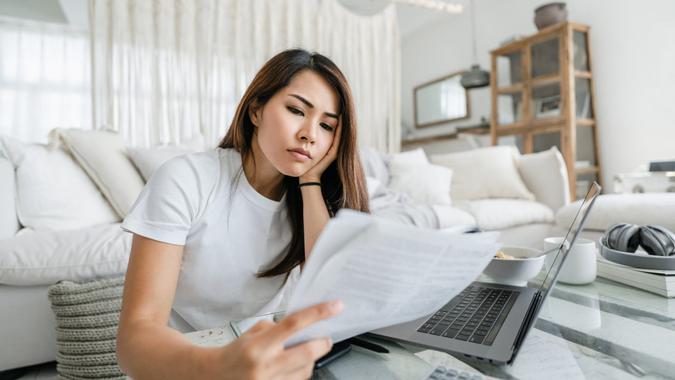 On April 28, America learned that the national GDP had fallen by 1.4% in the previous quarter. It was the most significant economic contraction since the pandemic shuttered the economy almost exactly two years earlier. On top of that, inflation is at a 40-year high with no end in sight, and if that weren’t enough bad news for you, the S&P 500 has lost more than 12% since the start of the year.

Read: Here’s How Much Cash You Need Stashed if a National Emergency Happens
Learn: Cash App Borrow: How To Borrow Money on Cash App

While the stock market, inflation and gross domestic product are only some of the indicators of the economy’s health, many credible experts are on record as saying that the economy is headed toward a recession — or even that it’s already in one. As you’ll learn farther down the page, however, it’s hard to make that determination until after a recession has already set in.

With the economy now dangerously close to a state of recession, or perhaps already there, it’s never been more important than now to understand exactly what that means.

Simply put, a recession is a period of decline in a country’s economic activity.

The NBER is a non-profit, non-partisan organization that conducts economic research and determines the fluctuations in economic cycles. It measures the periods between peaks –highs– and troughs –lows– in economic activity. When an economy begins to contract, that’s a recession. When it starts an upswing, that’s an expansion.

Economic Recessions in the US

The gross domestic product sometimes doesn’t decline in a recession, but it dropped 5.0% in the first quarter of 2020 and 32.9% in the second quarter. It did rebound 33.4% in the third quarter as businesses opened back up and increased 4.1% in the fourth quarter. By definition, a recession has to last at least two quarters, so you can’t tell you’re in a recession until after the fact.

How Long Do Recessions Last?

Historically, there have been a total of 34 recession cycles since 1854, lasting an average of 17.5 months. If you consider the period from 1945 to the present, the average length of a recession has been eleven months, which could signal that recessions are shrinking. As we saw in 2020, the economy rebounded relatively quickly, although it was a unique recession in that it came on suddenly and was government-induced.

The recession of 2020, was the shortest and steepest in U.S. history and marked the end of 128 months of expansion.

Key Predictors, Indicators and Warning Signs of a Recession

When searching for predictors and indicators of a recession, you’re likely to get myriad answers on what they actually are. Of all possible causes, you’ll likely hear the term “inverted yield curve” the most.

What Is a Yield Curve?

In mid-August 2020, interest rates flipped on short- and long-term U.S. Treasury bonds, creating what is known as the inverted yield curve. Put simply: Some investors are losing faith in the long-term health of the economy, and, as a result, there is a higher demand for short-term bonds.

The following graph shows two inversions of the yield curve in 2001 and 2007 — both of which preceded recessions.

While the COVID-19 crisis of 2020 and the resulting lock-downs that resulted from it are unique, there was an inverted yield curve in March of 2019, indicating that the possibility of a future recession was imminent.

Other Indicators of a Recession

Besides the inverted yield curve, there are other signs of a recession. John Hilsenrath, a Wall Street Journal senior correspondent, explained some potential recession indicators on the publication’s podcast, The Journal. Among them are:

Some people fear a recession when things have simply been “too good” for a long time. The recession caused by the coronavirus is an example of a shock to the economic system.

There is no true economic marker that differentiates a recession from a depression. A depression is just a general term for a very bad recession. Here’s a look at the Great Depression and the Great Recession by the numbers:

What Does a Recession Mean for You?

People of different economic backgrounds will experience the pains of a recession in different ways. Some general things will happen: Unemployment will rise, the GDP will shrink and the stock market will suffer. But a recession could have much more serious consequences for an unemployed single mother of two than it might for a young, employed professional with no dependents.

No matter what your situation is, there are a few things you should know to prepare for the next slowdown in economic growth.

How Can You Mitigate Potential Loss?

Recessions can be scary, but it’s important to keep your cool. In an interview with CNBC that took place shortly after the mid-August 2020 inverted yield curve, investment firm president Mitch Goldberg said not to make rash decisions.

“The things on the to-don’t list would be don’t panic, don’t make hasty financial and investment decisions,” Goldberg said.

If you are very concerned about a recession, and you feel that your short-term investments might not survive a bear market, you could move some of your investments to long-term CDs, high-yield savings accounts or just hold on to the cash. But if you have a diverse long-term investment portfolio, it should be built to weather both bull and bear markets.

What Does a Recession Mean for Your Employment?

During a recession, unemployment rises. That means that some parts of the workforce will be affected by the next recession. There’s no easy way to determine if you will lose your job during a recession. It’s helpful to look at:

Take a long, hard look at your current employment. Depending on your situation, it might not be a bad idea to spruce up your resume, just in case. And it’s always best practice to do whatever you can to make yourself indispensable and diversify your skillset. It’s a win-win for you and your employer when you’re performing at your best, no matter what the economy is like.

If you work in one of the industries hardest hit by the coronavirus, you may still have trouble finding a new job, especially if you’re between 16 and 24. Some industries may not recover to their pre-pandemic levels, although other job types have increased in demand.

What Does It Mean for Your Investments and Retirement Funds?

Learn from a big mistake some investors made during the Great Recession: They sold their stocks when they were plummeting, as did many investors when the market crashed in March 2020, only to miss the April recovery. Your long-term investment strategy should already have recessions and bear markets built into it, anyway. If you hold on to your investments long enough, they will eventually recover and be worth more in the long run. The same goes for your retirement accounts.

You should expect to experience a recession during your career. In the past 165 years, there have been more than 30 recessions. Statistically speaking, you’ll probably experience more than one while you grow your retirement nest egg.

Are There Any Benefits to a Recession?

It’s tough to find much of a silver lining when the cloud of recession is looming. But for the optimistic, there is good news, especially considering 2022’s endlessly rising prices: Slower inflation.

Although the goal of the Federal Reserve is to simultaneously tap the brakes on inflation while avoiding a recession, sometimes the latter could help stifle the former. While a recession won’t necessarily stop inflation, it can help slow it down — and at its current rate of 8.5%, inflation definitely needs some slowing down.

Also, since a declining stock market is part of a recession, savvy investors with cash on hand have an opportunity to buy stocks at a discount.

How Can You Prepare for a Recession?

There’s nothing you can do to avoid a recession, but it’s smart to get your money in order while the economy is doing well.

The most important thing to keep in mind is that the economy goes through phases of expansion and recession. Being diligent during the good times — and the bad — can help you be financially successful in the long term.

Andrew Lisa and Gail Kellner contributed to the reporting for this article.