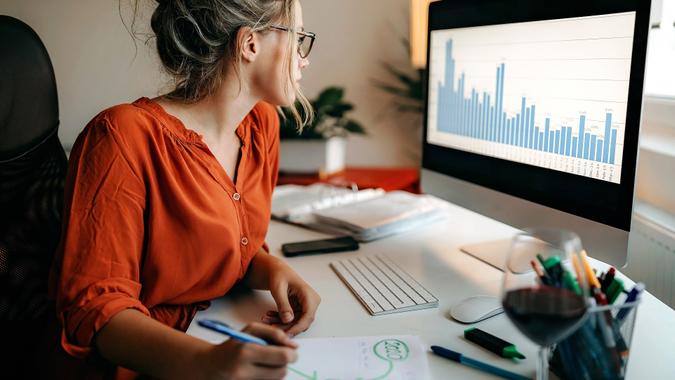 The rise of remote work in the wake of the COVID-19 pandemic might have yet another upside in the form of helping to ease inflation, according to a new study from the Becker Freidman Institute for Economics at the University of Chicago.

The study, released last week, found that remote work contributes to moderated wage growth because employees who work from home are willing to do so with lower raises than other employees. Lower wage growth helps ease inflation because it also slows other costs that contribute to higher prices.

The study was authored by a five-person team of Jose Maria Barrero, Nicholas Bloom, Steven J. Davis, Brent Meyer and Emil Mihaylov. It contains a lot of dense, academic language that can be difficult to wade through, but the points it ultimately makes are fairly simple.

One of those points is that skyrocketing inflation has led many workers to ask for higher pay. Meanwhile, an ongoing labor shortage has given workers a leg up in negotiating higher wages, which the study refers to as “catch-up” wages. Employers will accommodate the desire for higher wages to compete for a limited supply of workers.

“In effect, the surprise component of recent price inflation raises future wage inflation,” the study said. “Higher wage inflation, in turn, raises production costs and thereby feeds into higher price inflation. Thus, a bigger wage-catchup effect implies the need for tighter monetary policy to bring the inflation rate down to a desired level, raising the likelihood of recession in the process.”

This is all going on amid a steep rise in remote work that began during the pandemic. In their research, the study’s authors found that 38% of companies surveyed expanded their remote-work opportunities over the past year to “moderate wage-growth pressures,” and 41% expect to do so in the coming year.

How does remote work moderate wage-growth pressures? It mainly has to do with the advantages remote work brings to employees. They spend less time and money commuting and less time grooming. They also have more flexibility in how they use their time during the course of a day, greater personal autonomy, and less traffic-related stress.

Because of these advantages, remote workers tend to put less pressure on their employers to hike their pay. Granted, the difference isn’t much. The study found that on a size-weighted basis, remote-work opportunities moderated overall wage-growth pressures by 0.9 percentage points over a 12-month period ending in April/May 2022.

Looking forward, expanded remote-work opportunities are expected to moderate wage-growth pressures by another 1.1 percentage points in the 12 months following April/May 2022.

The rise in remote work also has brought greater use of part-time employees at nearly one-quarter of companies surveyed, and greater use of independent contractors at more than one-fifth. The use of leased workers has increased at about 10% of companies. These developments are likely to lower labor costs as well because on average, part-time, leased and contract workers cost less than full-time workers.