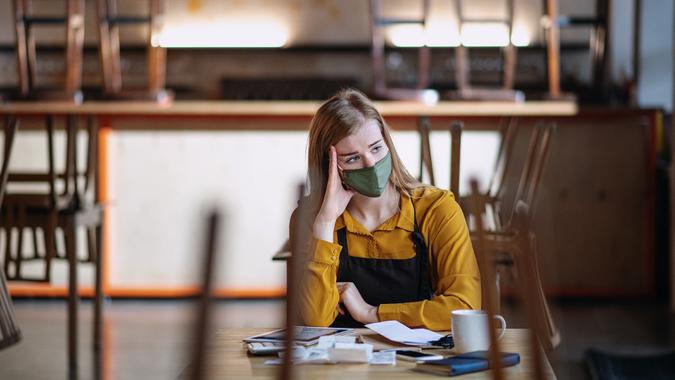 Conducted by the National Restaurant Association, the survey also found that 44% of operators think it will be more than a year before business conditions return to normal and 19% believe they never will.

Specifically, 78% of operators say their restaurant experienced a decline in customer demand for indoor, on-premises dining in recent weeks because of the delta variant spike. Costs are up, as well — 91% of operators are paying more for food; 84% have higher labor costs; 63% are paying higher occupancy costs. However, profitability is down, as 85% of operators reported smaller margins than before the pandemic.

The survey also noted that although the industry has added back many of the jobs lost during the pandemic, 78% of operators’ restaurants don’t have enough employees to support current customer demand. In addition, 95% of restaurant operators say their restaurant experienced supply delays or shortages of key food or beverage items during the past three months, and 63% of operators say their sales volume in August — historically one of the busiest months for restaurants — was lower than it was in August 2019.

Related: GDP Inches Upward to 6.7% Fueled by High Demand — Can Supply Shortages Be Remedied in Time?

In a letter to Congress yesterday, Sean Kennedy, executive vice president of Public Affairs for the National Restaurant Association, said that it’s against this grim economic backdrop that “we offer our input on the Build Back Better Act — specifically, our opposition with proposed tax increases on restaurants, our renewed call for replenishing the Restaurant Revitalization Fund, and our objections to the unprecedented changes.”

“Our nation’s restaurant recovery is officially moving in reverse,” he wrote. “The lingering effects of the delta variant are a further drag on an industry struggling with rising costs and falling revenue. We support many of the goals of the Build Back Better Act, but the legislation is too large and too expensive a check for small businesses to take on. Restaurants still need help today and overwhelming them with costly new obligations will only prevent progress in turning the tide of recovery.”

More: Grocery Store Shortages Comparable to 2020 — Are You Prepared for Lack of Supply During the Holidays?

The association is asking Congress to prevent new tax increases during the pandemic. “Congress has done admirable work to provide a lifeboat for restaurants during the pandemic, and should not reverse these efforts with a multitude of higher taxes,” Kennedy wrote.

Specifically, the association said it opposes any cap on the Section 199A Small Business Tax Deduction, which would deny small businesses earning over $400,000 or $500,000 in annual income the ability to preserve more of their working capital.

It also asks Congress to repeal the stepped-up basis, “which would make death a taxable event for family-owned businesses.”

Finally, the association added that increases in the corporate tax rate, will cost companies — including restaurants — over $540 billion. “Raising taxes during a pandemic imperils restaurants’ prospects for survival, our workforce, and the recovery of the communities we serve. If Congress institutes new taxes, many more restaurants will likely have to close their doors for good,” the association added.