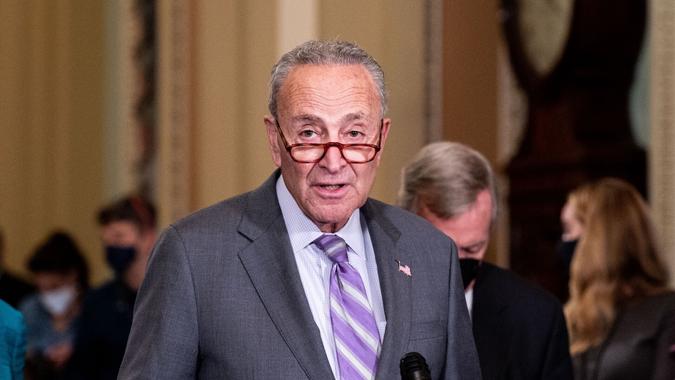 After much drama, last-minute decisions and finally, an agreed-upon deal between Republicans and Democrats, the Senate passed an extension of the debt limit avoiding a default on the national debt, last night.

See: Yellen Says Minting a Trillion Dollar Coin Is Not A Viable Option To Raise the Debt Ceiling
Find: Biden Warns Economy Headed ‘Over a Cliff’ If Debt Ceiling Not Raised

“With America honoring its full faith and credit: Senate Democrats are continuing our work to Build Back Better, help people and families, fight climate change, create the good-paying jobs of tomorrow, and rekindle that optimism that has long been the core of America’s identity,” Senate Majority Leader Chuck Schumer tweeted.

With America honoring its full faith and credit:

Senate Democrats are continuing our work to Build Back Better, help people and families, fight climate change, create the good-paying jobs of tomorrow, and rekindle that optimism that has long been the core of America's identity.
— Chuck Schumer (@SenSchumer) October 8, 2021

This last move came just 11 days before the U.S. hit its debt ceiling. “We now estimate that Treasury is likely to exhaust its extraordinary measures if Congress has not acted to raise or suspend the debt limit by October 18,” Treasury Secretary Janet Yellen said last month.

The Wall Street Journal reports that 11 Republicans joined all 50 Democrats in a vote to break the 60-vote filibuster threshold and proceed to final passage of the measure, which cleared the Senate 50 to 48, with two Republican absences.

The bill now goes to the House, where House Majority Leader Steny Hoyer said lawmakers would be called back from recess for an Oct. 12 vote. The White House said President Joe Biden would sign the bill, according to the WSJ.

Schumer spoke on the Senate floor in advance of the passage of legislation last evening, saying that “what is needed now is a long-term solution so we don’t go through this risky drama every few months, and we hope Republicans will join in enacting a long-term solution to the debt limit in December. We are ready to work with them.”

“This is a temporary but necessary and important fix. I appreciate that at the end of the day, we were able to raise the debt limit without a convoluted and unnecessary reconciliation process that–until today–the Republican Leader claimed was the only way to address the debt limit,” he added according to the transcript of his speech.

“Let me say that again: today’s vote is proof positive that the debt limit can be addressed without going through the reconciliation process – just as Democrats have been saying for months. The solution is for Republicans to either join us in raising the debt limit, or stay out of the way and let Democrats address the debt limit ourselves.”

As for McConnell, he also delivered remarks on the Senate floor regarding the debt limit, saying that “the majority didn’t have a plan to prevent default. So we stepped forward.”

“The pathway our Democratic colleagues have accepted will spare the American people any near-term crisis, while definitively resolving the majority’s excuse that they lacked time to address the debt limit through the 304 reconciliation process,” he added, according to a transcript of his speech.