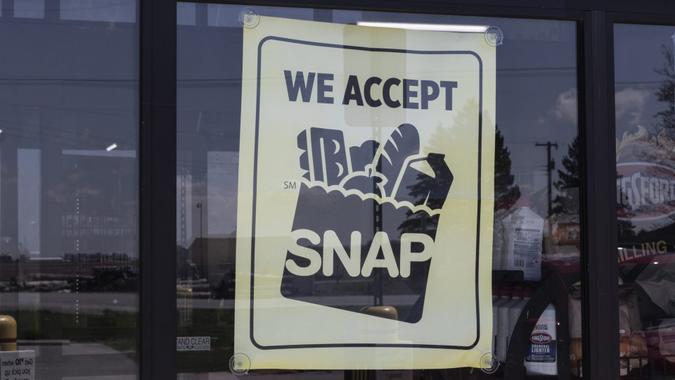 From inflation to the stock market to the GDP, recession warning signs are flashing red all over the economy. That’s especially bad news for the 40 million or so people who receive Supplemental Nutrition Assistance Program (SNAP) benefits. They count on their monthly payments more than ever during times of economic contraction. However, SNAP recipients aren’t the only ones who benefit from the program when times are tough.

SNAP Schedule: When Can I Anticipate August 2022 Payments?
More: 7 Things You Should Never Do When Planning for Retirement

The primary purpose of SNAP is to help the most vulnerable households stave off food insecurity, but a monthly injection of billions of federal dollars benefits the entire economy — especially when the economy is moving in the wrong direction. Let’s explore the impact of the very important program.

‘An Automatic Stabilizer for the Economy’

Just before the pandemic hit, the United States Department of Agriculture (USDA) released a report that called SNAP “an automatic stabilizer for the economy.”

The premise is that low-income SNAP recipients typically spend their benefits shortly after they receive them, which the USDA explains has a “cascading effect” throughout the economy. When recipients spend their SNAP money, that spending generates income for the people who produce, transport, market and sell the food that those dollars purchase. Those business owners and their employees then have more of their own money to spend, which injects even more money into the economy.

In times of recession, people lose their jobs, wages fall, investments and assets lose value and more people become eligible for SNAP. The government, then, adds new recipients to the rolls, increases assistance, and the program’s economy-stimulating power is multiplied even further.

In Recessions, SNAP Feeds People — and the GDP

The USDA’s Economic Research Service (ERS) conducted a study that adds some hard numbers to the concept of SNAP as an economic multiplier. During a slowing economy — like the kind that’s just around the corner if it’s true that America is headed toward a recession — every $1 billion in increased SNAP benefits adds $1.54 billion to the country’s gross domestic product (GDP).

That means that SNAP buys 54% more economic productivity than the benefits themselves provide — enough to support more than 13,500 jobs.

Also, when cash-crunched people in a recession begin receiving SNAP benefits, it frees up their limited personal cash for non-food expenditures like healthcare, durable goods, housing and utilities. The ERS says that the trade and transportation industries benefit most — both in GDP and jobs — when SNAP spending increases during economic downturns.

The Pandemic Put the Multiplier Concept to the Test

Thanks mostly to the Delta variant, according to CNBC, consumer sentiment was at its lowest point since the start of the pandemic. Overwhelmed with demand, food banks were busier than ever but were running out of food. The $20 billion expansion to the $79 program couldn’t have come at a better time — for the struggling households that relied on SNAP for food as well as for the economy itself.

Almost immediately, a jolt in consumer spending seemed to prove the USDA’s “automatic stabilizer” concept from two years earlier, when the agency presented SNAP as an economic investment, not an expenditure.

The compounding effect of expanded SNAP spending during the pandemic was verified by the chief economist at Moody’s Analytics, who calculated that every new dollar in SNAP benefits generated $1.67 in new economic activity — more than the USDA’s calculation of $1.54.

In Times of Crisis, SNAP Finds Its Way Into Local Cash Registers

In August 2021, at the time of the benefits increase, CNBC reported that those most likely to benefit from the influx of cash were small grocers and mom-and-pop shops — precisely those most negatively impacted by the pandemic. Since recipients are most likely to spend their SNAP dollars where they live, communities that are particularly hard hit by an economic downturn will have a higher number of people on SNAP. Their money is most likely to wind up in local cash registers, which makes SNAP one of the most precise forms of stimulus both for individual households and for local economies.

A little more than a year earlier in May 2020, the Center on Budget and Policy Priorities reported that a full 80% of SNAP-authorized retailers are small businesses. “These include many locally owned businesses, such as private groceries, convenience stores, dairies, butchers, bakeries, and farm stands,” the report stated.

The lower-income a neighborhood is, the greater SNAP’s impact on the local economy will be.

Around the time the 2021 benefits increase went into effect, Marketplace reported that most of the country’s 40 million or so SNAP recipients lived in cities. Even so, the Center For Rural Strategies reported that SNAP benefits have more than twice the impact on rural economies than they do on urban economies in terms of both jobs and output.

Just as with urban households, increased SNAP benefits boost spending by poorer rural households while also freeing up their personal dollars for non-food necessities like diapers and — in remote towns with no public transportation — car repairs.

There’s another angle to the dynamic, however, that makes SNAP a more potent economic stimulator in rural America. It’s all about who’s doing the eating vs. who’s doing the growing.

When urban households spend SNAP dollars, the food they’re buying comes from rural areas. That spending benefits the farm and food-processing industries, which support so many local economies in rural America.