Social Security Stimulus Snafu: California and Florida Are Leaving the Poorest Out Of Inflation Relief 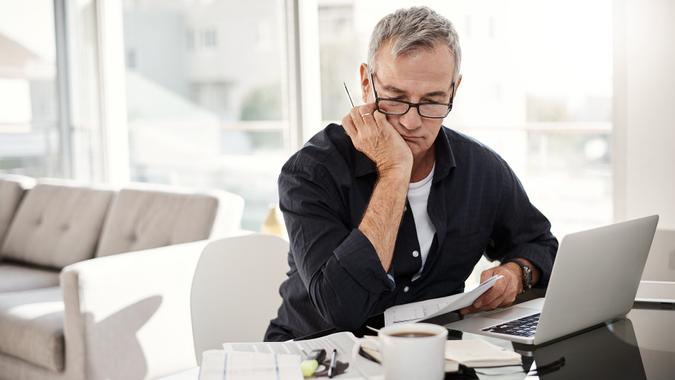 To help combat the rising costs associated with inflation, some states are offering relief checks to residents — but apparently not all residents. It seems that those not eligible to receive funds are the ones most impacted by the current economy, including seniors and those living below the poverty line.

Learn: How Much the Average Person in Your State Received in Stimulus
Find: 7 Things You Should Never Do When Planning for Retirement

In California, Governor Gavin Newsom signed a new $308 billion state budget into law at the end of June. It provides $9.5 billion in direct payments to 23 million residents as part of a Middle Class Tax Refund. Payments of up to $1,050 are expected to be deposited or sent via debit card (depending on how tax refunds were filed for 2020) starting in October and up until January.

But there are certain eligibility requirements. According to the state, you must have filed a 2020 tax return by October 15, 2021; been a resident for 6 months or more in the 2020 tax year and be a resident at the time the new payment is processed. Eligible residents must also meet the California adjusted gross income limits. Basically, anyone making up to $250,000 individually and up to $500,000 for a household will get the Middle Class Tax Refund payments.

Yet, for seniors and those living in poverty who do not file taxes (since Social Security benefits are not taxed in California), they are not eligible to receive the latest stimulus money. Per Fortune, it was the same scenario in 2021 when the Golden State Stimulus funds were sent to individuals and families to help with loss of income due to the pandemic. This was despite many receiving Social Security having paid state taxes for years before they retired.

According to Fortune, it all comes down to a snafu — the state agency that runs the Middle Tax Class refund doesn’t have residents’ tax profiles in their system to process payments. The state did come up with a workaround early on in the pandemic to send out the three applicable stimulus payments to non-tax filers, with many seniors now calling on the state to do the same.

It’s a similar situation in Florida, where Governor Ron DeSantis also put into effect a sweeping $35.5 million stimulus package as part of the First Lady’s Pathway to Prosperity initiative that will help around 59,000 families in the state battle the rising costs of inflation. Those with children will receive payments of $450 per child, with the governor’s office especially encouraging those who adopt or foster. Per CNET, these payments were starting to be administered as of July 25 and will continue to be sent out through August 7.

Of course, most seniors in the state aren’t eligible for these benefits, either, since most have grown children and not any under 18 living in their households.

While there are complaints that these relief programs are not inclusive of all residents, there is also the issue that not all 50 states are providing the same stimulus payments. In fact, only 16 states have such programs as of the end of July. In addition to California and Florida, this includes Colorado, Delaware, Georgia, Hawaii, Idaho, Illinois, Indiana, Maine, Massachusetts, New Jersey, New Mexico, Oregon, South Carolina and Virginia. Each state has varying benefits packages offered. Yet, with so few territories offering new stimulus to Americans, there are repeated calls for the federal government to step in and provide a national program for all citizens.

Stimulus Programs: Take Advantage Before the Money Runs Out
Explore: Absence of Child Tax Credit and Stimulus Checks Amid Inflation Has Parents Sweating Back to School Shopping

GOBankingRates recently reported on an expert who shared the impact these payments could have, even though it’s said to be unlikely that federal funding will be provided again. Elaine Maag, who works with the Tax Policy Center as a senior research fellow, confirmed that lower income households need these payments since they have less in emergency savings. As she said, “delivering some sort of cash benefit now would sort of protect them from the inflation that’s happening around them.”

Selena Fragassi joined GOBankingRates.com in 2022, adding to her 15 years in journalism with bylines in Spin, Paste, Nylon, Popmatters, The A.V. Club, Loudwire, Chicago Sun-Times, Chicago Tribune, Chicago Magazine and others. She currently resides in Chicago with her rescue pets and is working on a debut historical fiction novel about WWII. She holds a degree in fiction writing from Columbia College Chicago.