Stagflation: Is It Here or Are Fears Unfounded? 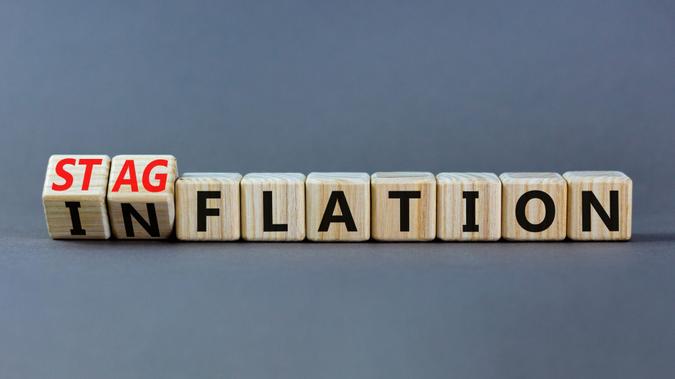 Despite fears that the U.S. economy might be headed toward stagflation — a rare event in which inflation rises while economic growth stalls — many analysts warn against pressing the panic button just yet.

Related: Thanks to Inflation, 64% of Americans Now Live Paycheck to Paycheck
News: Gas Prices Reach Historic Highs — How Much More Will You Pay at the Pump This Year?

The last time the American economy experienced stagflation was in the late 1970s and early 1980s, Kiplinger noted in a Monday column. Back then, oil prices skyrocketed and the inflation rate hit double-digits, while unemployment rose above 10% and the S&P 500 lost more than half its value.

In 2022, oil prices are surging to record highs and inflation has been hovering above 7%, its highest rate in 40 years. But the unemployment rate is near a historic low after dropping to 3.8% in February, according to the Bureau of Labor Statistics. And while the stock markets have tumbled this year after hitting all-time highs in 2021, they are still trading near their highest levels ever.

Meanwhile, a panel of economists surveyed by the Federal Reserve Bank of Philadelphia recently forecast that the nation’s real gross domestic product will rise at an annual rate of 3.7% in 2022 — slower than the growth rate seen last year, but still moving in the right direction.

The wild card is how Russia’s war with Ukraine will play out, and how that will impact inflation and economic growth. The war has already pushed oil and gas prices to their highest levels in more than a decade.

For now, however, many experts say stagflation fears are overstated, and many point to the nation’s economic growth as evidence.

“In a stagflation environment you see inflation — you don’t see growth,” Sarah Shaw, chief investment officer at 4D Infrastructure, told Bloomberg. “We are also seeing huge amounts of pent-up consumption demand, huge amounts of stimulus programs that are sitting in deposits and still haven’t flowed through to the economy. Huge amounts of that stimulus are in an infrastructure build-out that has massive growth multiplier potential.”

Scott Knapp, chief market strategist at CUNA Mutual Group, said in an email to GOBankingRates that the word stagflation “has been used far too often in the past several months.”

“What we’ve actually experienced has been standard inflation caused by excess demand generated by an overstimulated economy,” he said. “It was also amplified by meaningful but temporary supply shocks caused by the pandemic.”

See: Biden Announces Ban on All Russian Oil Imports
Find: How Much Does the President Control Gas Prices?

Developments tied to Russia’s invasion could tip the scales, though.

“Stagflation, by definition, is caused by a highly unusual break in the link between supply and demand; something exogenous like the oil embargo in the 1970s is required,” Knapp added. “Russia’s invasion of Ukraine has provided just such an exogenous shock. Global production capacity for many important commodities has been taken offline, likely for a lengthy period. This shift to the left in the long-run aggregate supply curve suddenly makes ‘stagflation’ a more appropriate characterization of current conditions.”