Stimulus Checks in 2022? How Omicron Could Prompt Discussions for Further Relief Payments 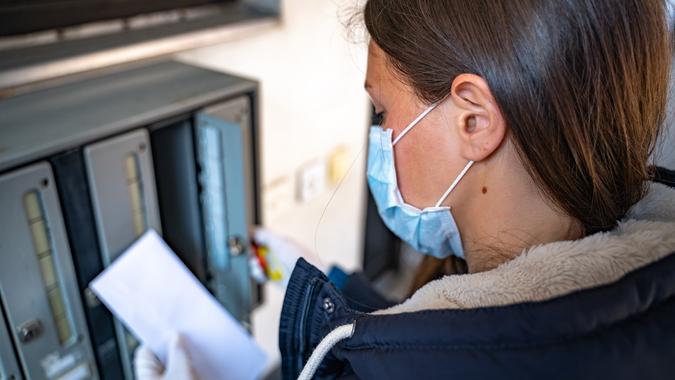 The Omicron variant of COVID-19 is spreading rapidly. New COVID cases during the last week of December hit a record seven-day average of 265,000 cases, higher than the previous record of 252,000 cases on January 11, 2021, CNBC reported. Symptoms of the new variant tend to be milder, leading to quarantines and increased absenteeism, disrupting supply chains and even causing some schools to close. On the upside, there are fewer hospitalizations and deaths than we saw in January 2021 with the original strain of COVID, leaving the economy slightly less worse for the wear.

Tax Surprise! If You Received COVID Benefits, You Could See No Refund — or Even a Bill
Child Tax Credit and Stimulus 2021 Recipients: Be on the Lookout for IRS Letter With Tax Filing Info

Plus, in spite of nearly 62% of the U.S. population being fully vaccinated, there are an alarming number of people who are vaccinated catching the virus. Johns Hopkins Medicine reported that some populations have experienced breakthrough infection cases as high as 1 in 100.

While federal and state governments seem hesitant to force lockdowns again, local shutdowns may begin occurring due to lack of employees able to work because they are in quarantine. Motley Fool reported that President Biden doesn’t intend to force widespread business shutdowns. But businesses may close if customers aren’t out shopping or dining, or if there aren’t enough employees to cover shifts.

Plus, in spite of jobless rates being low and the economy seemingly strong, many Americans are still struggling to recover financially. A U.S. Census survey taken the first two weeks of December 2021 showed that more than 25% of Americans struggled to meet household expenses the prior week.

However, Wall Street analysts say a fourth stimulus check does not seem likely, in part because pumping more money into the economy could hasten inflation. Brad McMillan, chief investment officer at Commonwealth Financial Network, said in a note reported by CBS News, “One cause of inflation has been an explosion of demand driven by federal stimulus.” Now that the stimulus has ended, he asserted, inflation and supply chain problems will continue to moderate.

An infusion of cash into the economy could heighten inflation, which could negate the benefits of additional stimulus funds.

Rather than hoping for more stimulus money, wrote Motley Fool’s Maurie Backman, we should hope that businesses can remain open and that the omicron strain remains mild and ends quickly.