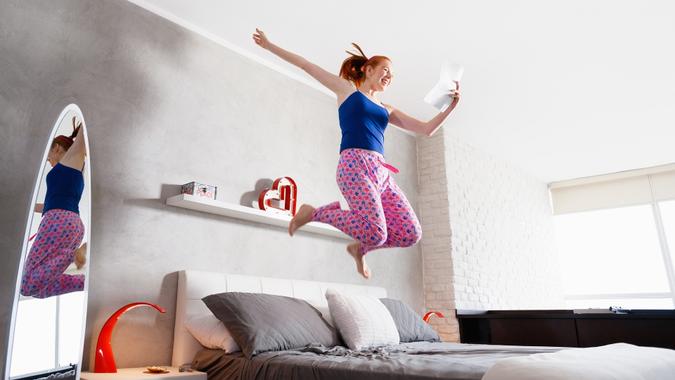 Gas prices and inflation as a whole have come down somewhat in recent weeks. However, prices are still much higher than they were a year ago, and that is leaving Americans feeling short-changed.

Save More: 11 Grocery Items To Buy at Dollar Tree
Student Loan Forgiveness: Mark These 4 Dates On Your Calendar Now

The federal government has not indicated that another stimulus check is on the way, so some states are taking matters into their own hands. As usual, each state has its own approach, with some offering tax rebates while others are simply cutting checks. A handful of states have stimulus relief checks or rebates on the way this fall. Find out if your state is on the list as well as some important dates to keep in mind.

Energy prices have been the center of the inflation universe, and Alaska wants to help ease the burden of those high prices for its residents. It will do so via the 2022 Permanent Dividend Fund, which is $3,284.00. That amount includes the energy relief payment.

Alaska governor Mike Dunleavy announced that payments would be distributed on September 20 to Alaskans who filed electronically. For those who filed a paper application, the payment will arrive beginning the week of October 3.

California will soon issue direct payments to its residents to help deal with rising costs. Payments will range from $200 to $1,050. For those who filed their taxes electronically, payments will occur from October 7 to October 25. The remaining taxpayers will receive their checks between October 28 and November 14.

Colorado signed a bill into law on May 23, 2022, that introduced the Colorado Cash Back relief program. Under the program, Coloradans may be eligible to receive a check of $750 for single filers or $1,500 for joint filers.

To be eligible, you must have filed your Colorado state income tax return or have applied for a property tax, rent or heat credit rebate by June 30. No further action is necessary if you have already done one of those things. Those who are eligible will receive their payment by September 30 if they haven’t already.

In June, Illinois announced it would begin a robust program to help its residents purchase the basic necessities. It hopes to lessen the burden around groceries as well as gas and property taxes. In doing so, it announced several upcoming tax holidays for the summer of 2023.

But those 2023 dates are still many months away. To provide some immediate relief, Illinois is issuing payments of $50 to individuals who made less than $200,000 in 2021. The state estimates that to be a total of 6.2 million taxpayers. The state began issuing checks on September 12 and says it will take about eight weeks to send checks to all qualifying residents.

Indiana is providing relief to its residents in the form of its Automatic Taxpayer Refund. Those who were eligible for the earlier $125 ATR will receive a one-time payment of $200 as part of an additional ATR. According to the state, it began printing checks on August 15.

However, it says the program will take some time — it anticipates it will finish issuing the 1.5 million checks to eligible residents by mid-October. Thus, it asks residents to wait until November 1 before contacting the Department of Revenue about checks that you haven’t received.

Rhode Island will issue more targeted relief in the form of child tax rebates. Under the program, eligible taxpayers will receive a $250 tax credit per child with a maximum credit of $750. Anyone who has filed their 2021 tax return and has an AGI of $100,000 or less ($200,000 for married couples) may be eligible. There are other ways to qualify too, such as by having a qualifying child dependent.

For those who filed an original or amended return by August 31, rebates will begin starting in October.

Virginia is giving its residents a one-time tax rebate to cope with rising costs. A law was passed earlier this year that will give eligible taxpayers a rebate of up to $250 for single filers. Joint filers can qualify for a $500 rebate.

Not all residents are eligible, however. For example, those receiving only Social Security, disability insurance or unemployment insurance won’t qualify. Those who are eligible and who filed their taxes by September 5 will receive their rebate by October 31.