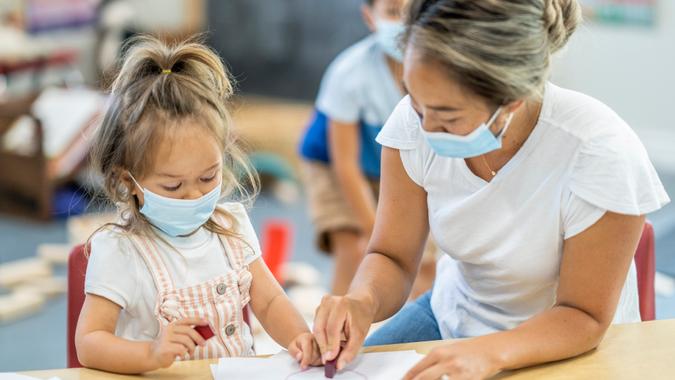 Child care workers have been a godsend for many parents trying to navigate their way through the COVID-19 pandemic, and in Alabama those workers are being rewarded.

See: Stimulus Update: You May Be Owed Money – Here’s How to Find Out
Find: The Effect of Stimulus and Increased Unemployment Payments on the Economy in 2022

More than 10,000 child care workers in Alabama received bonuses totaling $12.6 million following the first round of Child Care Workforce Stabilization grants from the Alabama Department of Human Resources (DHR), per the Alabama Political Reporter (APR). The second round runs from Feb. 28 through March 18.

The program was launched in November to help child care providers recruit and retain qualified staff after losing many workers during the pandemic.

“The nationwide staffing shortage has tested the resilience of Alabama’s child care providers,” Alabama DHR commissioner Nancy Buckner said in a statement. “As they continue to persevere, these bonuses will help recruit much-needed reinforcements and reward current employees for their dedicated service to the children and families of Alabama.”

Eligible workers can get up to eight quarterly bonuses before the two-year grant period ends in Sept. 2023, the APR noted. To qualify, child care providers must be in operation when they apply and they must continue operating for at least one year after getting the grant. Applicants also must be in good standing with the DHR.

The DHR administers the grants through the Alabama Partnership for Children and the Talladega Clay Randolph Child Care Corporation. Funding comes from the American Rescue Plan.

This is the third grant the DHR has offered to child care workers during the pandemic. A pair of earlier programs awarded a combined 2,427 grants totaling $56.8 million to help providers reopen and stay open.