Stimulus Updates To Know for Spring 2022 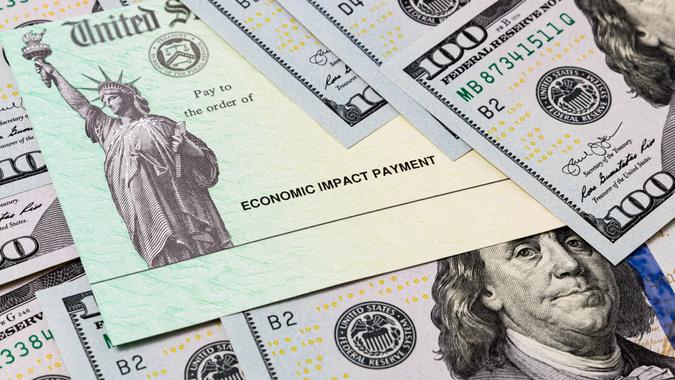 The coronavirus pandemic brought unprecedented stimulus to American businesses and workers to the tune of trillions of dollars. Stimulus payments came in waves, and as the pandemic lengthened, it almost seemed as if the government would continue to print money forever to bail out the economy. But even as widespread mask mandates and travel restrictions remained in place, the American economy enjoyed a sharp and rapid recovery. Combined with the trillions of dollars of stimulus money in the system, inflation exploded in early 2022 to levels not seen in decades. What does this mean for additional stimulus payments in spring 2022?

Find Out: How To Get Rich With a Normal Job
See: 50 Ways You’re Throwing Money Away

Federal Stimulus Is Likely Over

From March 2020 to February 2022, the U.S. government injected roughly $5 trillion in stimulus money into the economy. Of that, roughly $1.8 trillion went directly to individuals and families, while another $1.7 trillion went to businesses. But the federal government’s appetite for more direct stimulus is waning. The Biden administration seems focused primarily on infrastructure spending, while many economists warn that additional stimulus would only accelerate the rise in inflation, which hit an astonishing 8.5% in March 2022. Until this trend reverses, federal stimulus is likely on pause, if not over completely.

But There’s Always a Glimmer of Hope

Although pockets of the economy are booming, the unemployment rate remains above where it stood before the pandemic, and other enhancements, such as the expanded child tax credit, have expired. The bottom line is that many Americans are still struggling. Against this backdrop, numerous proposals for additional stimulus have been pushed, from a fourth stimulus check to recurring $2,000 monthly payments. If the economy were to roll over again, or if another coronavirus variant began increasing hospitalizations and deaths again, the drumbeat for additional stimulus may grow louder.

Although the federal government seems to be out of the stimulus business for the time being, many states have picked up the ball and are running with their own stimulus proposals. Although not all will be approved, here’s what some of the states are working on to get their residents more aid.

The state of California has run a surplus for the past two years, and residents have benefited. In 2021 and early 2022, the state sent out two rounds of direct stimulus checks to residents, and in 2022, Gov. Gavin Newsom has proposed sending out debit cards in the amount of $400 to help offset the rising cost of gas. Residents would receive one card per car owned, up to a limit of two — or $800 — per household, with payments coming as early as July.

Democrats in Illinois are proposing stimulus checks that would arrive in residents’ mailboxes by September, amounting to $100 per person and $50 per child in each household. The proposal would also provide up to $300 in property tax relief checks, the suspension of grocery taxes and gas tax increases for six months and a freeze on school supplies taxes for 10 days in August.

Residents in Idaho will get rebate checks or direct deposits amounting to the greater of 12% of their 2020 taxes or $75.

The governor of Maine, Janet Mills, has proposed sending state residents stimulus checks of $850. The money will come from the state’s $682 million surplus.

New Mexico residents who file joint returns and have incomes under $150,000 will receive a one-time tax rebate of $500. Single filers with incomes of under $75,000 are eligible for a $250 rebate. Other credits include $1,000 for full-time hospital nurses, a refundable child tax credit of up to $175 per child, a three-year partial income tax exemption for military retirees, and an extension of the solar market tax credit, equal to 10% of qualifying purchase and installation costs.

Indiana lawmakers approved an expansion of the state’s $125 stimulus payments to residents to make about 450,000 low-income residents also eligible.

Gov. Brian Kemp recently signed stimulus payments for Georgia residents into law. These one-time refunds would be $250 for single taxpayers (or married filing separately), $375 for heads of household and $500 for joint filers.

New Jersey Gov. Phil Murphy has proposed sending out $500 stimulus checks to low-earning taxpayers who filed using a tax identification number rather than a Social Security number, in an effort to include undocumented immigrants.

Virginia legislators are hashing out the details of a potential $300 stimulus check to all Virginia taxpayers. Two other proposed bills are looking to reduce or eliminate the state’s grocery tax and suspend the state’s 26.2-cent gas tax for one year.

New York Gov. Kathy Hochul has proposed a property tax rebate ranging from about $425 to $970 for low- and middle-income households in the state. In addition to other actions, including tax relief for businesses, the state is also implementing a suspension of the state tax on motor fuels through December.

In January, Gov. David Ige proposed a $100 refund for all taxpayers and dependents. In April, the Hawaii House Committee on Finance upped the ante, approving $300 checks for taxpayers earning less than $100,000, or $100 for those making more than that.