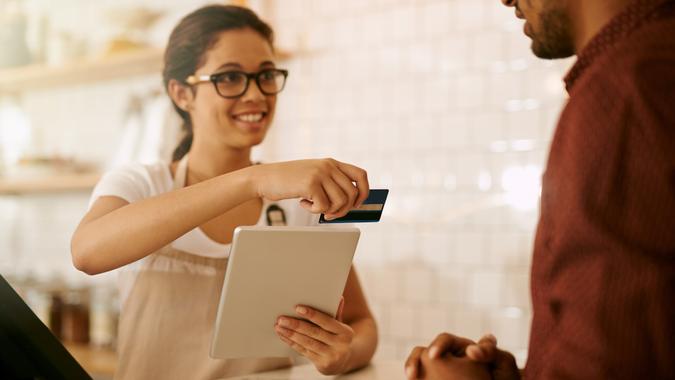 Everyone knows — or should know — that most servers in restaurants depend on customer tips to get by. This is why it’s so important to be as generous as possible when dining out or getting takeout.

But what if you’re being pressured to tip more than you can reasonably afford?

See: Is ‘Tipping Fatigue’ a Myth? Americans Tip 10% More Despite Inflation
Find: This Credit Score Mistake Could Be Costing Millions of Americans

Increasingly, restaurants are embracing point-of-sale (POS) technology that gives consumers an, ahem, tip on what to tip. Generally, you’ll see options ranging from 15% to 35%. (Etiquette experts, by the way, suggest that diners leave between 18% and 20% tip for waitstaff). These machines can be super helpful for diners who don’t have time to do the math and can also help deter cheapskates from stiffing waitstaff.

The problem, as some Americans see it, is that these machines also suggest a tip when you’re just popping in for a takeout order. And not just at restaurants, but also at bakeries, coffee shops and other quickserve establishments. Sometimes, the recommended tip amount is 35% — pretty steep if you’re just ducking in to pick up some donuts.

Perhaps because they’re feeling the heat to tip more, Americans are tipping less on takeout. This is likely a result of “tip fatigue.”

According to a report from Toast, the overall tipping percentage in Q2 2022 was strong — averaging 16.9% at quick-serve establishments and 19.6% at full service restaurants. But there is a dip in tips dished out on takeout and delivery orders. The average tip for these purchases was just 14.5%.

Still, 14.5% on a takeout order — when you aren’t being waited on — is nothing to sneeze at, especially not with inflation causing the price of food to soar. But it still does point to tip fatigue. Basically, Americans are tired of shelling out the high percentages that the POS machines suggest.

“During COVID, everyone was shell-shocked and feeling generous,” Eric Plam, CEO of Uptip, told CNBC. “You are starting to see people pull back a little bit. This point-of-sale tipping is what people resist the most.”

It makes sense that consumers would want to tip less on a takeout or delivery order than they would for a full-service dining experience — but one must also again consider the crucial role that tipping plays, especially for delivery drivers, who, like regular waitstaff, may rely on tips to make a living.