The US GDP Is Down 1.4% – Here’s How It Compares to Other Countries 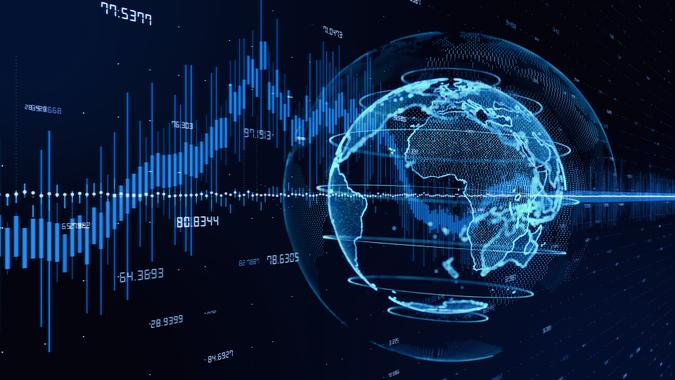 The real gross domestic product (GDP) decreased at an annual rate of 1.4% in the first quarter of 2022 in the U.S., the Bureau of Economic Analysis (BEA) said on April 28. This figure was disappointing as it was below Dow Jones’s estimates of a 1% gain for the quarter and follows the fourth quarter increase of 6.9%.

See: Here’s How Much Cash You Need Stashed if a National Emergency Happens
Find: Surprising Things You Can Buy With Food Stamps

The war in Ukraine, inflation and supply chain issues all affected the U.S. But how does the country’s GDP fare compared to that of other countries?

The services growth in February 2022 was mainly driven by tourism-related industries with increases in travel agencies, tour operators and other reservation services and related activities (growing 33.1% on the month), and accommodation (growing 23% on the month), it added.

In the first quarter of 2022, seasonally adjusted GDP increased by 0.2% in the euro area and by 0.4% in the EU, compared with the previous quarter, according to an estimate published by Eurostat, the statistical office of the European Union on April 29.

Among the Member States for which data are available for the first quarter of 2022, Portugal (+2.6%) recorded the highest increase compared to the previous quarter, followed by Austria (+2.5%) and Latvia (+2.1%). Declines were recorded in Sweden (-0.4%) and in Italy (-0.2%). The year-on-year growth rates were positive for all countries, Eurostat added.

According to the European Central Bank, (ECB) overall, real GDP growth is projected to average 3.7% in 2022, 2.8% in 2023 and 1.6% in 2024. Compared with the December 2021 projections, the outlook for growth has been revised down by 0.5 percentage points for 2022, mainly because of the impact of the Ukraine crisis on energy prices, confidence and trade, the ECB added.

Germany’s GDP rose by 0.2% in the first quarter of 2022, but the economic consequences of the war in Ukraine have had a growing impact on the short-term economic development since late February, according to the Federal Statistics Office (Destatis) on April 29.

On April 27, the German government cut its growth forecast for 2022 to 2.2% from 3.6% projected in January as Russia’s invasion of Ukraine, sanctions and high energy prices take a toll on output, Reuters reported.

The NBS said in a release that in the first quarter, faced with the multiple tests of an increasingly grave and complex international environment and frequent outbreaks of the Covid-19 pandemic at home, “under the strong leadership of the Central Committee of the Communist Party of China (CPC) with Comrade Xi Jinping at its core,” the country implemented its COVID-19 policy successfully, and “as a result, the national economic recovery was sustained and the operation of the economy was generally stable.”

Japan forecasters slashed first quarter estimates to 0.64% from 5.04%, according to the Japan Center for Economic Research (JCER).

According to a Deloitte report, Japan’s economic recovery is underway, but it will remain uneven until at least the second half of 2022. The Omicron outbreak weakened the economy at the start of this year and high energy costs will erode consumer purchasing power and raise imports, the report says, adding that supply chain issues, meanwhile, will keep a lid on export growth. Although policymakers are tempting companies to raise wages more quickly, strong wage gains are unlikely this year.

March was marked by the war in Ukraine, the first consequences of which are being felt in the French economy, Banque de France said in a release. In addition, in response to the resurgence of the COVID-19 epidemic, China reintroduced lockdown measures in certain regions, which may have increased supply difficulties.

POLL: What Do You Think of Elon Musk Buying Twitter?
Discover: GDP Downgraded Slightly Back to 6.9%, Breaking From Economists’ Upward Predictions

In turn, after returning to its pre-crisis level in the third quarter of 2021, earlier than the European average, GDP is expected to continue to grow in February and March, albeit more moderately, due to the international environment, Banque de France said. GDP growth for the first quarter of 2022 is expected to stand at around +¼ percentage point compared to the previous quarter, it added.