US Technically in a Recession? Breaking Down Atlanta Fed Numbers and Potential Impact 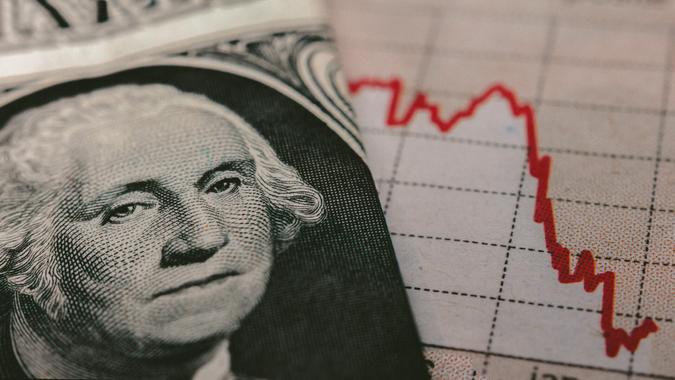 Fears of a U.S. recession moved from the worry stage to the reality stage late last week, according to a Federal Reserve tracker that says the recession has already begun.

See: 10 Things You Should Always Buy at Walmart
Find: 20 Best Places To Live on Only a Social Security Check

The Federal Reserve Bank of Atlanta’s GDPNow tracker now predicts that second-quarter GDP will decline by 2.1%. That’s a reversal from the tracker’s early June prediction that second-quarter GDP would increase 0.3%, as reported by CNBC. A dip in the Q2 economy, coupled with the 1.6% decrease during the first quarter, would mean two straight quarters of declines, fitting the technical definition of a recession.

“GDPNow has a strong track record, and the closer we get to July 28 release [of the initial Q2 GDP estimate] the more accurate it becomes,” Nicholas Colas, co-founder of DataTrek Research, wrote in a note.

Recent data shows continued weakness in consumer spending, mainly due to the highest inflation rate in more than 40 years. The Fed has jacked up interest rates by 1.5 percentage points since March to tame inflation, and more hikes are expected in coming months. This has led some businesses to put the brakes on production and expansion.

A recent survey from the Institute for Supply Management found that the pace of growth in the U.S. manufacturing sector fell sharply in June from the previous month, the Financial Times reported. Executives polled by the organization indicated that new factory orders deteriorated because of long lead times and high prices.

What all this means to the average American remains fuzzy. One of the chief worries is that companies will stop hiring or even cut jobs, but that doesn’t seem likely over the near-term because on the ongoing labor shortage, some observers say.

“There remains a tremendous imbalance between number of candidates and number of openings, and that’s not going to go away soon,” Jim Kwapick, district director of staffing agency Robert Half International, told CBS Minnesota. “Salaries have moved up and employers continue to move salaries up.”

But at least one financial expert predicts that the labor market will cool off as the Fed continues to raise interest rates.

“What central banks are trying to engineer is a degree of softening in the labor market,” Gurpreet Gill, a macro strategist of global fixed income at Goldman Sachs Asset Management, told Bloomberg Television. “They want to slow the labor market to the extent that companies shelve new hiring plans but don’t necessarily engage in large-scale layoffs.”

The index showed that “fewer buyers are rushing to make offers,” resulting in an increase in the number of homes that have had price reductions from the original list price.

“A deceleration in home prices is a natural response to increasing interest rates, and home prices are still historically high,” Steve Reich, chief operations officer at Finance of America Mortgage, told GOBankingRates in an email statement. “While many of these factors point to encouraging signs for buyers who aren’t priced out of the market and are looking to get some reprieve from the competitive, high-price environment, it’s also worth noting that new macroeconomic headwinds may play a bigger role in people’s home purchasing decisions than in recent months.”