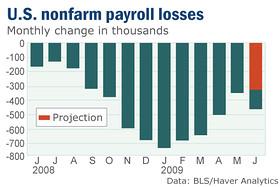 The US unemployment report paints a grim picture–more jobs were lost in June than in May, suggesting to many economists that a recovery by the end of the year is highly optimistic. 467,000 nonfarm payrolls were lost last month, compared to 322,000 jobs lost in May. Overall, the unemployment rate grew in June to 9.5% from 9.4% the previous month.

The country has continued to experience a bleak job market, while average salaries remained flat. This poses a danger as inflation could hit, causing an even bigger hit to the average American worker. The average workweek fell by 6 minutes to a record low 33 hours. The industries hit the hardest by the economy were construction, manufacturing, professional and business services, financial services and retail.

Obama Wants Wall Street to Take Responsibility for the Economy