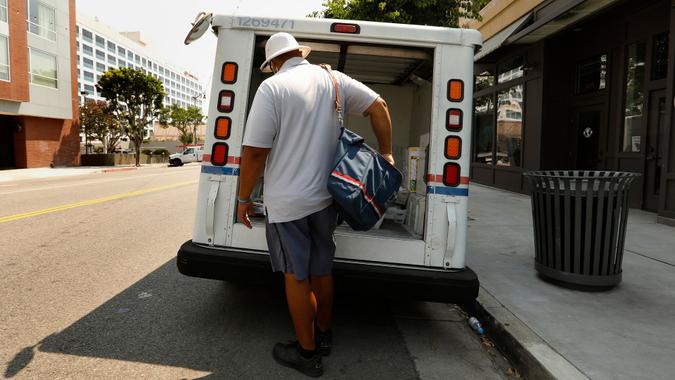 The price of a U.S. First-Class Mail stamp is going up again, and the United States Postal Service (USPS) is hinting at more hikes on the way.

Discover: 10 Costco Brand Items With the Best Bargains in May
More: 9 Bills You Should Never Put on Autopay

The USPS recently filed notice with the Postal Regulatory Commission (PRC), proposing price changes to take effect July 10. The new prices, if approved, include a two-cent increase in the price of a First-Class Mail “Forever” stamp, from 58 cents to 60 cents.

The hike was originally proposed on April 6, when President Joe Biden signed the Postal Service Reform Act into law. The bill was originally passed — with strong bipartisan support in both the House and the Senate — a month earlier. This act eliminated pre-fund retiree health benefits (resulting in an expected savings of $50 billion over the next 10 years) and cemented a six-day-a-week mail delivery schedule.

Whether this helps the USPS in the long run is dubious as some experts are predicting another price increase in Jan. 2023. Speaking at a May 5 Postal Service board of governors meeting, Postmaster General Louis DeJoy basically confirmed future price increases, saying, “I will most likely be advocating for these increases.”

“The mailing industry needs to be prepared for continued use of our authority to raise prices on market dominant products at an uncomfortable rate until such time as we have accomplished our objective of projecting a trajectory that shows us becoming self-sustaining — as required by law,” DeJoy stated.

The USPS expects to lose approximately $110 billion over the next decade and has endured 14 consecutive years of net losses. The USPS had a net loss of $639 million in its 2022 second quarter end, compared to an $82 million net loss for the same period last year. The agency is experiencing slowdown and stiff competition from shipping companies like FedEx, Purolator and UPS.

The proposed prices, approved by the Governors of the U.S. Postal Service, would raise First-Class Mail prices approximately 6.5 percent, according to USPS director of mailing and services pricing Samie Rehman. The increases are deemed necessary to recover costs incurred amid the slowdown caused by the COVID-19 pandemic.

In 2020, the Postal Rate Commission implemented a new system of rate-setting, giving the USPS more flexibility to set higher prices than the rate of inflation. Despite the PRC’s firm control over the USPS pricing model, a petition has been filed — by the Alliance of Nonprofit Mailers and the Association for Postal Commerce — to persuade the PRC to reconsider the rate-setting system given the enacting of the new Postal Service Reform legislation.

Rehman stated that other postal services would increase in cost, including the price of post office boxes (7%), money orders (14.4%), sending a certified letter (6.7%), sending a registered letter (6.2%) and return receipts (7.1%).

The PRC will review the prices and is expected to approve these price changes before they are scheduled to take effect. The last price hike for Forever stamps occurred in Aug. 2021, when the USPS raised the stamps from 55 cents to the current 58 cents.