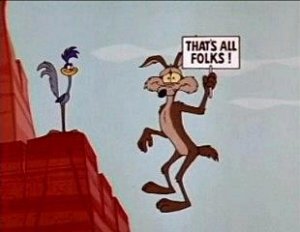 When I hear the term “fiscal cliff,” the Road Runner cartoon comes to mind. It seems Wile E. Coyote was forever falling off cliffs in his unsuccessful pursuit of the Road Runner.

I liken the majority of U.S. citizens to the Coyote, with the policy-makers (and that includes the very rich who can “buy” policy) collectively being the Road Runner. Like the Road Runner, who exists in la-la land where only cartoon physics applies, they’ll be fine should the economy fall off the cliff.

Meanwhile, like the Coyote, most of us live in the real world, so we’re subject to real world physics and the “Ouch!” of falling off a cliff.

What Is the Fiscal Cliff?

The fiscal cliff refers to the significant reduction in the U.S. budget deficit and the resultant slowing of the economy — and potential recession, if specific laws are allowed to automatically expire or go into effect at the end of 2012.

These laws — with current political stances — include:

To keep things simple, this one can be thought of as the “Bush tax-cuts extension.”

There are other features, but the primary and well-known feature included in this law was the extension of the so-called “Bush tax-cuts,” which reduce taxes on those making over $250,000 per year. The Bush tax cuts are due to expire at the end of 2012.

The current political status? This summer, the President proposed temporarily extending the tax cuts for the first $250,000 of annual income for all American taxpayers. This equates to a full extension for about 98 percent of households.

This proposal moves closer to what the Republicans want because taxpayers making above $250,000 will not pay higher taxes on their first $250,000. The President had originally wanted to entirely repeal the tax cut for those with incomes above a certain level.

This proposal was opposed by Republicans in Congress, who want the tax cuts to include all taxpayers regardless of income.

This law calls for spending reductions to lessen the budget deficit.

Naturally, there’s partisan bickering and a standstill on this one, too.  Republicans want to chop away at some programs the Democrats believe are crucial safety nets and should not be reduced to the extent the Republicans want.

The Conundrum – and Effects of the Fiscal Cliff?

There is a conundrum here. In other words, we’re in a “damned if we do, damned if we don’t” situation. It’s a  case of pay big now, or likely pay some time in the future.

Will the U.S. Fall Off the Fiscal Cliff?

We’re seeing the usual lines drawn in the sand at this point. There will likely be no significant progress on this issue until after the Presidential election. Of course, the party who wins the election will have a bit of an upper-hand in the negotiations.