Where Do Americans’ Finances Stand 2 Years Into the Pandemic? 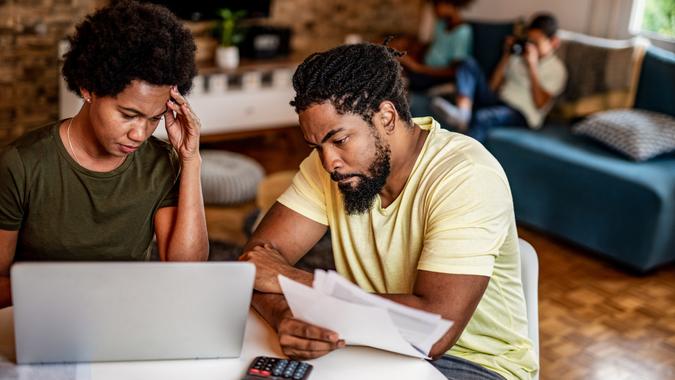 In March 2020, no one could really predict how long the COVID-19 pandemic would last — or how much it would affect the finances of so many Americans. Now, two years into the pandemic, 71% of families still have not recovered financially, a recent Clever study found.

Cut Costs: Unplug These Appliances That Hike Up Your Electricity Bill
Be Aware: 50 Ways You’re Throwing Money Away

Here’s a closer look at Americans’ finances, and why so many are still struggling.

Most Americans Have Lived Paycheck to Paycheck During the Pandemic

According to the study, 70% of Americans have lived paycheck to paycheck at some point during the pandemic — an increase from last year when 61% said they had. There are a few reasons why more Americans are struggling now than at the same time last year.

“One reason is inflation — the cost of living is greatly outpacing wages and salaries,” said Danetha Doe, spokesperson and economist at Clever Real Estate. “Another reason is that some of the benefits provided by the federal government, such as the Child Tax Credit, were discontinued.”

Doe also noted that it’s important to recognize that many Americans are currently underemployed.

“Although unemployment rates are down, which can be interpreted as a booming job market, the unemployment rate does not account for underemployment,” she said. “Underemployment includes folks that eagerly accepted an hourly wage job because of the signing bonus, but were not given full-time hours. Signing bonuses were offered to attract folks during the Great Resignation, but unfortunately, some of these companies chose to cut back on expenses by hiring an increased number of part-time employees rather than full-time workers.”

Only 15% of Americans feel financially secure, the survey found.

“Most Americans do not feel financially secure for a number of reasons,” Doe said. “One is inflation and how it is chipping away at the ability to make ends meet and/or save for the future. Another reason is uncertainty about the future. Folks across the socioeconomic spectrum may feel uncertain about their ability to live a comfortable life because they do not have a safety net they can fall back on during difficult times. In our study, we found that two in five Americans (41%) have no emergency savings. Understandably, without a safety net, folks will not feel financially secure.”

As previously noted, 71% of families said they haven’t recovered financially since the start of the pandemic. In addition, parents are more likely to be living paycheck to paycheck than non-parents — 72% versus 66%.

“Families have been hit particularly hard during the pandemic because with kids at home, there was an increase in food, utilities and miscellaneous costs,” Doe said. “These additional costs were because the children were not in school where they may have received lunch and other items.”

The need for at-home child care also meant that many parents had to leave the workforce.

“Some families may have found that both parents could not continue working with the children at home, so one parent may have reduced (or eliminated) their earnings in order to look after the children,” she continued.

Another reason families are struggling more is inflation.

“Inflation has increased the cost of groceries and other daily expenses, which is multiplied when you have more humans in the household,” Doe said.

Americans Are Fearful That They Will Always Be in Debt

The number of Americans confident they can pay off their debt within a year has plummeted from 56% last year to just 22%.

“As more Americans live paycheck to paycheck, they may need to use credit card debt to cover living expenses,” Doe said. “Folks sometimes use debt to cover the gap between income and expenses. We found that 22% of Americans took on credit card debt to make ends meet. If their wages or salaries do not increase, it will be tough to pay the debt off.”

Financial Milestones Are Being Put on Pause

The survey also found that nearly half (40%) of respondents who planned to buy a home in 2022 are pushing back their plans.

“This is largely due to astronomical increases in housing prices,” Doe said. “Potential homebuyers are finding it more difficult to secure a house they can afford and when they do, they may be outbid by investors or all-cash buyers.”