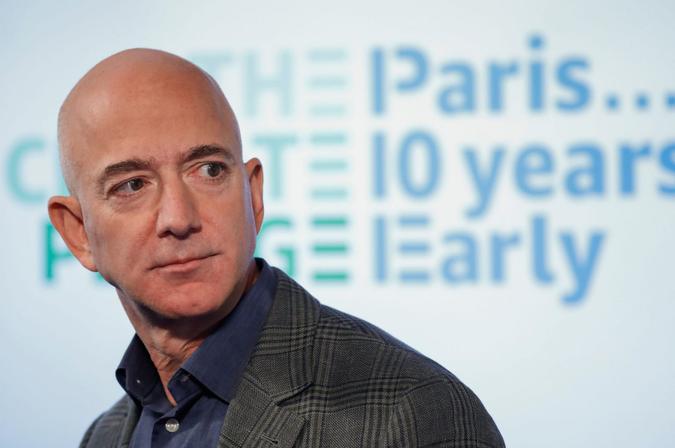 Jeff Bezos’ space company Blue Origin launched its first-ever astronaut crew to space via a rocket called New Shepard at 9 a.m. today, following an auction for a seat on the 10-minute ride to space. In a statement ahead of the launch, Blue Origin put it simply: “This seat will change how you see the world.” The rocket landed safe and sound, after Jeff Bezos called it the “Best day ever,” according to CNN.

See: If You Could Afford to Go to Space, Would You? Igor Tasic Shares Why He Bid on a Seat on Bezos’ Spaceship
Find: Elon Musk’s SpaceX Beats Out Jeff Bezos’ Blue Origin to Nab NASA Moon Contract

“That seat” originally came with a $28 million price tag, which enabled 18-year Oliver Daemen — the first paying customer and the youngest astronaut in history — to take part in the historic flight. He is taking the seat of the person who bid and had “a scheduling conflict.”

“We thank the auction winner for their generous support of Club for the Future and are honored to welcome Oliver to fly with us on New Shepard,” Bob Smith, CEO of Blue Origin, said in a statement. “This marks the beginning of commercial operations for New Shepard, and Oliver represents a new generation of people who will help us build a road to space.”

The auction, which started May 5, was open to anyone and the winning bid amount will be donated to Blue Origin’s foundation, Club for the Future, “to inspire future generations to pursue careers in STEM and help invent the future of life in space,” according to the statement.

But what is 10 minutes in space truly worth? How do private citizens feel about taking on a journey that pilots and soldiers take months or even years to train for? GOBankingRates spoke with one of the early bidders back in May to find out and reconnected with him.

Igor Tasic, a member of The World Economic Forum Digital Leaders of Europe, began his conversation with GOBankingRates saying, “As you could see I was outbid.”

“But I am inspired by the flight[…]. In particular, Bezos’ choice to bring Wally Funk and his brother on the flight is meaningful. There is a lot of skin in the game there and strong messages that will have long-term repercussions for space travel and how people will perceive technology,” Tasic says.

He adds that Funk’s choice, for instance, is of utmost significance.

“A pioneer woman who never had the chance to fly despite her indisputable talent and readiness. His choice particularly touched me because it reminded [me of] my mom (who passed in 2013 and would be Funk’s age now). Adventurous and courageous women. Real trailblazers who had to face the stupidity of some men who couldn’t tolerate being beside a brilliant woman. I think Bezos also recognized that. So he humanized the whole thing.”

Tasic adds that, “It’s less about the victory of technology and more about humans using technology to gain perspective of its home planet.”

He further elaborates that “it is not even fair to compare the flight […] with Branson’s flight or Musk’s projects. Bezos is in it for the next century and beyond. To create infrastructures that will bring people to the moon and explore Earth from a significantly different perspective. The vision of Amazon will seem ‘small’ compared to what Blue Origin will potentially achieve (or at least is aiming for). On a personal level, it would [have been] an absolute honor to be on that flight[…], but I am very much inspired by it and what some people will get from it in the future.”

Back in May, Tasic, whose work at the WEF relates to creating and promoting innovation hubs, said that “As COVID [unfolds], the future of innovation (and work at large) will be decentralized. A kid starting a business in the countryside of France or Brazil can now indeed be on par with other kids in Silicon Valley or Tel-Aviv. And this will create new paths for systemic inclusion in innovation in years to come.”

See: Numbers Behind the Modern-Day Space Race: Why Billionaires Are Obsessed With Going To Space and How Much They’re Spending
Find: Richard Branson Gave Elon Musk a Brilliant Career Tip You Need to Steal Right Now

He said, at the time, he’s always been interested in space, particularly remembering the launch of the Hubble Telescope in 1990 and later the construction of the International Space Station, which started in the late 1990s.

“Most of us can only intellectually understand what space is. But being actually there, fully conscious of how infinitesimal tiny you are (in comparison to Earth and the Universe), somehow gets you closer to a universal truth about things. I can’t think of a more transformative experience for a human than experience (and travel through) space,” Tasic said.

This story was updated to address the completion of the space flight.