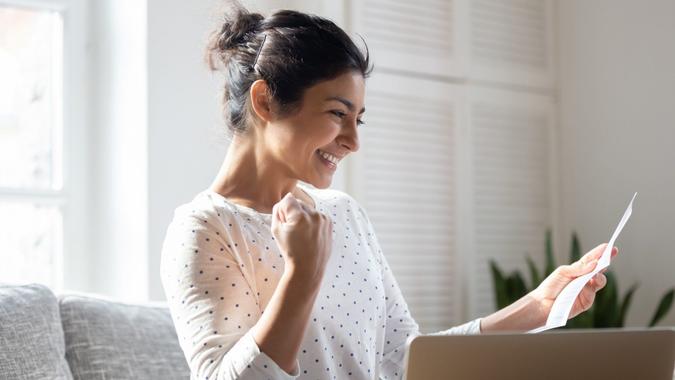 The past year has been tough financially for many Americans — millions lost their jobs, had hours cut, struggled to pay their bills and even missed rent and mortgage payments. But despite major setbacks, many have faith that their money luck will soon be turning. A recent survey of over 1,000 Americans conducted by Consolidated Credit found that 93% are feeling optimistic about their finances in 2021.

GOBankingRates spoke to financial experts to find out the possible reasons behind this surge of optimism — some of which may apply to you too.

Find Out: The Standard Emergency Savings Advice Was Wrong — How Much Do You Really Need?

The pandemic gave some Americans the opportunity to reassess their finances and see the potential to do more with the money they had.

“With so many people being confined to their homes, they were able to cut back on their discretionary spending, which gave them additional funds for paying down debts, savings and investments,” said Gerald Grant III, a CFP with Equitable Advisors. “Many were shocked at the amount of discretionary income they had and now are optimistic as they more effectively allocate their funds for the future.”

Read More: What Living Through a Pandemic Has Taught Us About Money

Many Americans concentrated on saving more, which could give them peace of mind about dealing with unpredictable situations — like a pandemic — in the future.

“CIT Bank’s recent survey, conducted by The Harris Poll in February 2021, found that Americans have prioritized their savings strategies as a result of the disruptions over the past year, with 26% of Americans saying that they are spending more time managing their savings now than they were this time last year,” said Ravi Kumar, head of Direct Bank at CIT. “A heightened focus on bolstering savings may be causing Americans to feel more optimistic about their finances.”

See: 8 Major Ways We’ve Had To Adjust Financially Due to the Pandemic

Mortgage rates reached record lows in 2020, enabling some buyers to afford homes they previously were unable to.

“Having the peace of mind of securing a home of their own has made the future look a lot brighter for many,” Grant said. And it’s not just first-time buyers who have benefited from low interest rates. “In addition to new home purchases, existing homeowners have been able to take advantage of low interest rates by refinancing their existing mortgages,” he said. “This has allowed them to decrease their cash flow or pull additional funds out to do projects around the home or pay off other debts.”

Be Aware: 17 Dumb Home-Buying Mistakes That Hurt Your Wallet

Investors Saw High Returns Over the Course of the Pandemic

“Individuals investing in 401(k) [plans] and other investment vehicles were able to see growth throughout the pandemic as the markets still finished positive amid the crisis,” Grant said. “Some of our clients approaching retirement who initially had concerns about still being able to retire entered into 2021 with optimism, as many of their accounts grew significantly despite the large decline in early 2020. This growth has really encouraged many to invest more and learn more about the markets. Many of my clients are thanking me for telling them not to get out of the market and in some cases, invest more of their liquid funds.”

Check Out: 4 Investing Lessons the Pandemic Has Taught Us

Those Who Lost Jobs May Have Benefited From Government Assistance

The relief bills passed by former President Donald Trump and President Joe Biden have helped some Americans who lost work to land on their feet, so even those who were or currently are unemployed may feel optimistic looking ahead.

“For hourly or gig employees who were laid off or could not find work, there was an abundance of help from government benefits,” said Anthony Pellegrino, a fiduciary advisor and founder of Goldstone Financial Group in Oakbrook Terrace, Illinois. “Many people were eligible for regular unemployment benefits, as well as an additional $600 per week during 2020. This meant if you were working full-time at $24 per hour, you saw a 100% wage replacement from unemployment benefits. If you earned less than $24 per hour, you actually received more than your normal income while unemployed. Additionally, many Americans were eligible for multiple stimulus payments for themselves and their children.”

In addition, those who lost jobs may feel optimistic about finding a new opportunity in the near future.

“As more people become vaccinated it is creating optimism about people going back to work,” Grant said.