Can You Ask Friends To Contribute When You Host a Party? 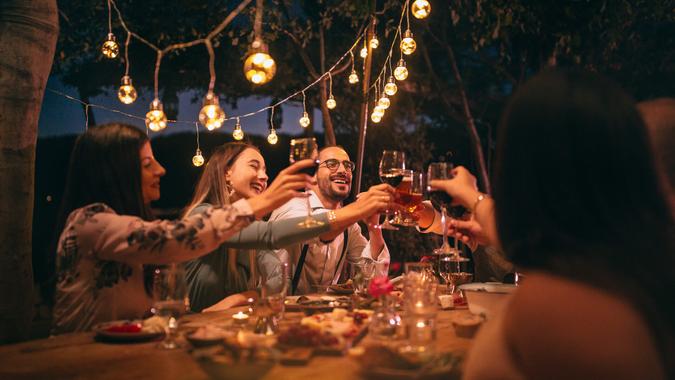 Having a party can be a major undertaking — and majorly expensive. While you’re happy to host, you’re hoping to avoid footing the entire bill.

This makes sense, considering hosts spend an average of $1,422.65 per year on must-haves like food, drinks and décor, according to a survey conducted by OnePoll on behalf of BJ’s Wholesale Club. Putting out a BYOB request might not be too helpful either, as only 45% percent of guests actually comply.

Cash App Borrow: How To Borrow Money on Cash App
Save More: 9 Bills You Should Never Put on Autopay

You don’t want to offend the people you plan to entertain, but you also don’t want to put a strain on your finances. This has left you feeling a bit stuck because you want to strengthen friendships at your party — not lose them.

Generally speaking, when you invite guests to a party, you’re expected to pay for it, said Julia Esteve Boyd, founder of The Etiquette Consultant, an international etiquette firm, based in Lausanne, Switzerland. Of course, as with most rules, she said there are always exceptions.

“Asking guests to contribute for an event is sometimes considered acceptable if they have been asked beforehand during a previous discussion,” she said. “So it’s generally considered impolite to offer to host a party and then ask for contributions after the event.”

When it comes to asking for financial assistance, Boyd said she would avoid this entirely, unless the subject is approached delicately.

For example, she suggested phrasing your request as, “Why don’t we arrange and host a party for X. We can all contribute and plan something really great.”

If you do intend to ask guests to bring something, she emphasized the importance of making this clear from the start.

For example, she suggested wording your invite as “Why don’t we all have a get together at my place? Everyone can bring some and drinks and we can make a party of it.”

In fact, she said summer barbecues are hosted frequently in Switzerland — where she is located — and it’s very common to receive an invitation with a request to bring your own meat, as it is notably expensive.

Alternatively, she said you could host the event at a public venue, such as a restaurant.

“Let the guests know what the menu will cost and include,” she said. “Guests will often accept this without any problem.”

No matter what, Boyd said you need to have this matter settled with guests before the festivities commence.

“Never ask guests for monetary contributions after an event unless they were advised and agreed beforehand,” she said. “They may have chosen to decline had they known.”

Jodi RR Smith, president of Mannersmith Etiquette Consulting, based in Marblehead, Massachusetts, agreed that asking friends to contribute to your party largely depends on how you do it.

“If you want to have a fundraising meal at your home, it would be perfectly acceptable so long as you disclose your plans — and the price — when the invitation is issued,” she said.

Generally speaking, she said a basic dinner invitation comes with the expectation that you will provide everything, while a potluck dinner comes with the assumption that guests will contribute something.

“What is not allowed is a bait-and-switch,” she said. “It is terribly rude to invite over friends under the guise of a dinner party and then after they have arrived, turn it into an unofficial fundraiser.”

She agreed with Boyd that if you want your guests to contribute to your party, you must let them know when you extend the invitation. Ultimately, she said a bait-and-switch is the main issue — not asking for money in general.

“That is totally allowed, so long as it is disclosed with the invitation,” she said.

So there you have it — if you decide to ask guests to contribute to your party, the only acceptable way to do so is to make your expectations clear from the start. This will ensure everyone is on the same page, so guests can enjoy the festivities, instead of resenting you for asking them to contribute to a soirée they assumed was on your tab.