Do You Know Your Bank Account Balance? 55% of Americans Don’t (and Are Too Afraid To Find Out) 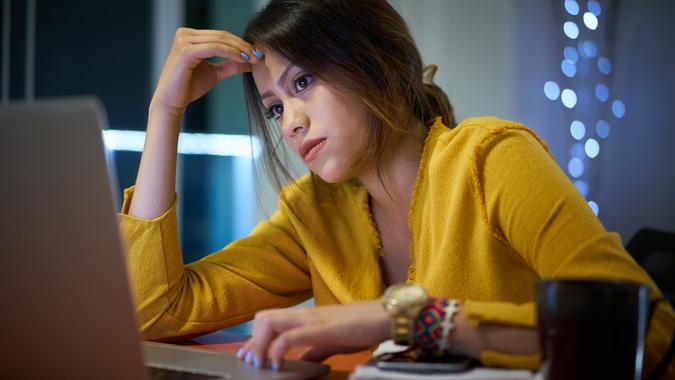 Have you ever been afraid to check your bank account balance after a late-night Amazon spending spree? Or maybe you’re fairly careful with your money, but you’re often concerned if you’ll have enough to pay the bills. If so, you’re not alone, according to a new study from personal finance app Cushion, which uses sophisticated technology to negotiate fees with banks and credit card companies for consumers.

If logging into your online banking account to check your balance leaves you feeling a little queasy, that’s not so unusual either. The study found that 59% of people surveyed feel an anxiety spike before they check their bank account. They also reported that ATM fees, overdraft fees and so-called “convenience fees” caused the greatest amount of stress.

The survey included 2,000 American adults ages 18 to 57-plus, with the majority between the ages of 25 and 40. Nearly half of survey respondents reported living in the Northeast, which includes 5 out of the top 10 states with the highest cost of living, according to a separate study reported by World Population Review.

The Cushion survey also found that nearly one-third of Americans get hit with overdraft fees every 1 in 3 times they pay their bills. Meanwhile, 3 out of 5 people are so troubled by bank fees, overdraft fees and keeping track of their bank balance that they said they would be happy only using cash for everything, skipping the stress of banking altogether.

“Overdrafts account for more than half of the fees that Cushion detects on users’ accounts. Throughout the COVID-19 pandemic, many of those overdrafts were a result of overdue rent, utilities, credit card payments and other essential costs,” said Cushion CEO Paul Kesserwani.

He said, “If consumers are willing to physically go out of their way to avoid a fee, imagine how much they could save if they were more willing to hop on the phone with their bank, or sign up for a service to negotiate (those fees) for them.”

The First Steps To Taking Control of Your Finances

Kesserwani also provided advice for Americans who are interested in gaining better control of their finances.

“Eliminating the fear associated with checking your bank account balance is no easy feat, especially amidst a financially, physically and emotionally draining pandemic,” he told GoBankingRates. “For many people, money has been ingrained in their lives as a source of stress, a deterrent, something that keeps them from achieving their full potential. If this is you, try flipping the script: Imagine money as a tool, an enabler that can help you get to where you want to be in your personal and financial life.”

First, he said, get into the habit of checking your balance and reviewing your transactions every day. “Doing nothing is the worst thing you can do,” he said. “Even if you start slowly, just start.”

See: These Are the Best Banks of 2021 – Did Yours Make the Cut?
Find: Pandemic Widens Retirement Planning Gender Gap

This could mean calling your bank, credit card company or utilities providers to negotiate a better deal. “Find ways to eliminate financial waste,” he said.

If getting on the phone and negotiating lower rates or trying to convince providers to waive fees sounds daunting, don’t be afraid to ask for help. Technology can help streamline the task while taking your emotional involvement in the outcome out of the picture to reduce stress. “Cushion’s fee negotiation engine gets smarter by the day and refunds millions of dollars to our customers each month,” Kesserwani said.