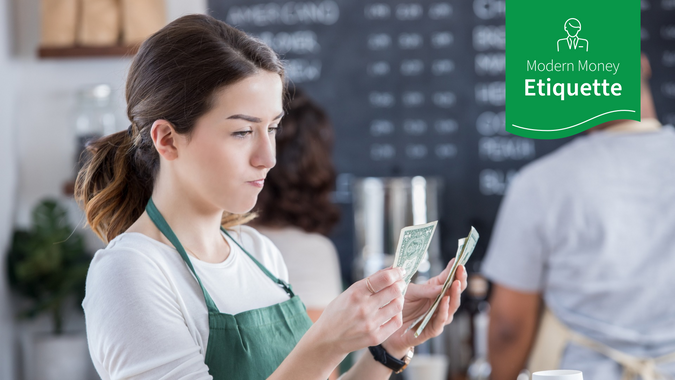 It’s a proven fact that most of us think we’ve got the art of tipping down. According to a survey, 81% of Americans say they are great tippers. However, the service industry begs to differ. A new report finds 80% of workers are seeing a decline in tips.

It seems like Americans aren’t quite the great tippers they perceive themselves to be. Or, you might think you’re a good tipper, but like anything else, standards change. See which habits get you labeled a bad tipper so you can change them for good.

See: Rude Money Habits You Need To Break Now
Find Out: How Much To Tip When Traveling to These 25 Countries

More than half of Gen X and millennials reported they do not include tax when they’re calculating the tip. However, the tax is a part of the bill, and the servers you’re tipping also have to pay that sales tax when they shop in that city. Plus, the tax is typically not a lot more, and you don’t have to subtract anything when trying to figure out the tip.

Read: The Most Annoying Tipping Habits Waiters, Baristas and Bartenders Deal With

Though 15% is within the recommended tipping range for service, it’s the absolute least you should tip. There has long been an idea that the amount of the tip should correlate to the service, so good service earns a tip, and bad service doesn’t get one.

The tip isn’t always just “extra cash” for the server, though. Some waiters in America still earn a tipped minimum wage, which means they can earn as little as $2.13 an hour, with the expectation that tips will make up for that.

Tipping 20% rather than 15% helps close that gap quicker, so waiters are guaranteed a livable wage. If you consider the service poor and leave no tip whatsoever, you’re not just leaving a comment card with your opinion, you’re costing that server their livable wage. Experts recommend telling the server if there’s a problem (like letting them know you want your water filled more regularly), rather than reflecting it in the tip.

It’s also important to note that tips can be split between the waiter and other members of the staff, so your lack of a tip actually affects multiple people, rather than solely the person who waited on you.

Check Out: Should You Still Tip When Service Is Bad?

You Only Tip at Sit Down Restaurants

In America, it’s pretty standard to tip 15%-20% to a server for a meal at a restaurant. However, etiquette experts suggest that you tip other service workers, like bartenders, counter servers, and delivery drivers. For bartenders and counter servers (like those working at a coffee shop), the standard tip is $1-2 a drink–no matter what the drink is. This means cocktails and beer both get tips, even if ordering a beer is technically easier than making a cocktail. If they also served you food, tip between 15%-20%. Buffet waiters should receive $1-2 per diner for getting your drinks. For delivery drivers (including those who deliver your food through an app), experts recommend tipping either between 15-20% of the bill or $5 — whichever is higher. For room service, it’s appropriate to tip 15%-20%.

Outside of food, there are separate tip expectations. For salon services like massages, hair and nails and even tattoo parlors, 15%-20% is the norm. For taxis (including rideshares), 15%-20% of the fare is the suggested tip amount, while valet is anywhere between $2-5.

Do It Right: Etiquette Rules You Need To Know If You’re Ordering Gifts Online

You Assume Tipping Is the Same Outside of America

America is actually an outlier when it comes to tipping. In a lot of European countries as well as Australia, all servers make the minimum wage, so tipping isn’t as necessary, nor is it expected from patrons. In China, no one really tips, but it’s not completely unwelcome. In Japan, tipping at restaurants is seen as rude, while tipping for tourist activities can be okay. In Hong Kong, tipping is seen as rude, and a 10% gratuity is already built into most services. Your best bet is to research the norm before you visit a country so you can feel confident about tipping etiquette before you’re in a stressful situation.