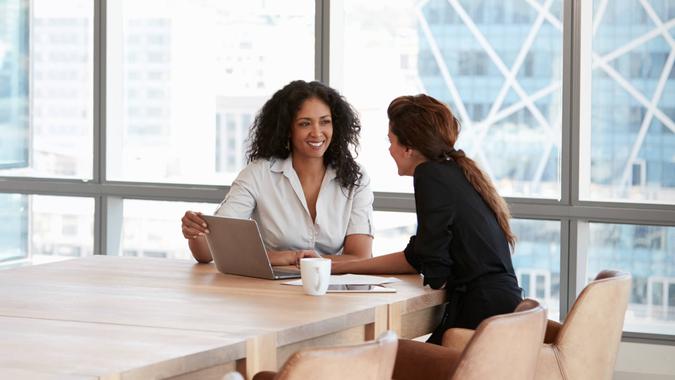 Women have suffered the most financially during the pandemic, but there are nascent signs the situation is improving. For example, the wage of American women rose and outpaced the wage of men in February, 4.4% to 4.1%, according to the Atlanta Federal Reserve’s wage tracker. Now, and in light of Women’s History Month, several experts are offering financial advice on how women can get raises, invest in real estate or retire early.

Listen Now: Live Richer Podcast: Secrets From Women in Finance
Women and Money: The Complete Guide To Being a Financially Savvy Female

Asking for a Raise

According to a Laurel Road survey, while women continue to leave the workforce, often feeling they are underpaid or undervalued, and struggling with mental health burdens related to work-life balance in higher proportions than men, many of them plan to ask for a raise in 2022 and are willing to switch jobs for the pay they feel they’ve earned.

Indeed, a staggering 73% of women say they feel they were disproportionately impacted by events from the Covid-19 pandemic, a decrease of only 4% from 2020, and 69% of women feel they are underpaid concerning their current value at their company, the survey notes. However, in an encouraging sign, 54% of women – and 59% of BIPOC women – stated they think they will ask for a raise in 2022.

Tori Dunlap, the founder of Her First $100K and host of the Financial Feminist podcast, said on The Live Richer Podcast that financial feminism should be coupled with policy change or with systemic change.

“When it comes to personal finance and personal finance decisions, 10% of it is your own choices, 90% of it is circumstantial,” she said. “I will say part of the reason why we negotiate is of course not to just get more money and more benefits right now, it’s also because you are trying to figure out if this is a company you can grow with. And you especially figure this out if you’re negotiating for a new job. You have more power negotiating for a new job than you will ever have, even if you stay and make a blood pact at a company for decades.”

Dunlap said that if you negotiate kindly, respectfully, and you present it well, and they don’t respond well to that, that’s a huge red flag, and if you’re already at that company, maybe it’s time to start looking for something else.

Mindy Jensen, community manager at BiggerPockets.com, a real estate networking and information resource platform, said in an interview on The Live Richer Podcast that even with prices and interest rates going up, it’s a great time to invest in real estate – if it makes good financial sense.

“If you are not running the numbers, if you just drive past a house and say, I’m going to buy it and you don’t do any research, it’s a terrible time to invest in real estate. And if that’s your approach, it’s always a terrible time,” she said. “So you really have to be making smart decisions and that’s going to be the advice for anything in life.”

If you’re buying a house as a rental property, Jensen says that you should start by looking at the market and the demand. “Is there any desire for that property? If you’re in a city where property values are going down, because the big employer just left, employees are leaving too to go find a job. There’s no demand for the rental property. Doesn’t matter that you can get it for free. If nobody’s going to rent it for you, it’s not a good rental property,” she said.

“It goes back to my comment about educating yourself. This is a big purchase that you’re making. You should be making a smart decision with that money. Just because the bank is footing the bill, you’re still footing the bill for that. The bank is bringing the money to the closing table, but that’s a lot of money,” she said.

In terms of the Fed hiking interest rates, Jensen says that this should not be a factor driving you to “frantically buy something” now.

“Don’t just buy because everybody else is buying. Buy because you feel like you want to be a homeowner,” she said.

Investing in a High Inflation Environment

The Labor Department released its Consumer Price Index on March 10 and the 12-month increase, which has been steadily rising, is the largest since the period ending January 1982. Over the last 12 months, the all items index increased 7.9% before seasonal adjustment. Increases in the indexes for gasoline, shelter and food were the largest contributors to the seasonally adjusted all items increase. While investors are concerned, some experts note that if you are in the right strategy and you are in the right investment plan, volatility in the market should not derail you.

Michelle Brownstein, Senior Vice President of the Private Client Group at Personal Capital and Certified Financial Planner, said that for example, if you were in a position to retire on December 31st of last year and now you’re not, “that tells me that you’re probably taking more risks than is appropriate for this point in your life.”

She says that a really classic mistake she see investors make is the lack of diversification. For example, if you bought only technology companies, it “has felt really good until the last couple months where they’re getting killed by the market because those stocks have gotten a hit harder than some utility stocks, for example, or some of the broader base names out there.”

Brownstein says she encourages her clients to give themselves a gut check in volatile times, because all of the market movement is cyclical, and you’ll see certain things come into favor, while other things go out of favor.

“So if you have a really well-rounded and diversified portfolio, in one area of the market getting beaten up should not impact your long-term plan. And if it is that tells you that you’re not diversified enough, you’re not in necessarily the right strategy. So I actually look at volatility that again, gut check or the opportunity to say, am I in the right place? If not, let’s take stock and get to a strategy that’s more appropriate for where I’m at in my life,” she said.

Brownstein also tells women to use financial tools to empower themselves, and to work with an advisor – something she likens to going to a doctor.

“I don’t self-diagnose if I’m feeling sick. I go to the doctor. I don’t have a medical degree. I don’t ever want to go to medical school. I don’t need to know all of that. So I delegate that,” she says.