5 Jobs With New Hire Bonuses To Apply For Right Now 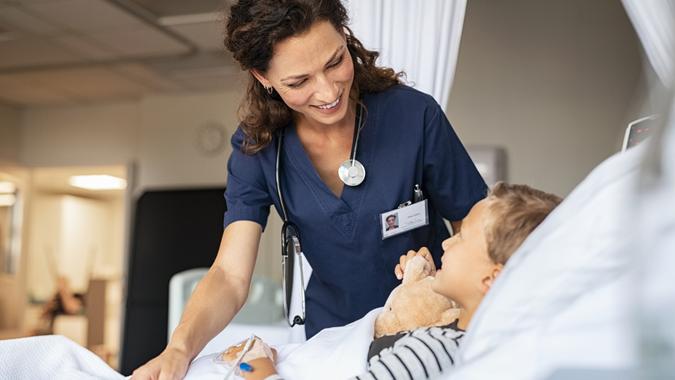 As of late July, the U.S. Bureau of Labor Statistics reported there are 10.7 million job openings across the country. Even so, many employers have reported difficulties attracting qualified candidates and hiring the right people to fill the role.

Part of the issue, according to the U.S. Chamber of Commerce, is due to the fact that 47 million people quit their jobs in 2021, leaving a large gap and a subsequent worker shortage. Some of the reasons cited were wanting better pay and more work-life balance.

There are also some industries that have been hurt harder than others, says the U.S. Chamber of Commerce — among them are food service and hospitality, education, retail and health care.

To try to entice more people to apply, some companies are now offering bonuses to sway more candidates.

If you’re looking for a new profession, here are some of the jobs offering incentives now.

One of the country’s largest employers, Amazon, has more than 1 million employees according to Geek Wire, and they’re trying to fill several essential roles, some of which offer sign-on bonuses.

One of them is an air associate role (a person that helps load and unload cargo for customer deliveries) and it comes with a $1,000 bonus. The job is posted in a few markets including Ohio and Kentucky.

Pharmacists can receive almost a year’s annual salary with the $75,000 signing bonus Walgreens is offering to fill a critical gap in their retail stores.

According to the Wall Street Journal, pharmacists left in record numbers at the start of the pandemic and the roles so far have not been able to be filled, which has upset both customers and colleagues alike. These large bonuses are listed in Walgreens job postings across the country.

The hospitality industry hasn’t really had the chance to recover from the boon in post-pandemic travel as many hotels are scrambling to fill guest services and housekeeping roles.

Large chain Marriott for example has been hosting job fairs — including one this week in hot destination spot Orlando, per WFTV — in which all hourly employees are eligible for a $1,000 sign-on bonus.

School is about to be back in session but teachers are not coming back in many cases. America is experiencing a nationwide teacher shortage with U.S. Department of Education Secretary Miguel Cardona saying that 300,000 educators and staff are needed across the country to meet the needs of students heading back to school.

Some states are taking matters into their own hands. In Taos, New Mexico, teachers’ starting salaries come in at $50,000 with hiring incentives of $10,000, according to a recent Facebook post promoting the openings. And in Hartford, Connecticut there are several tiers of signing bonuses with up to $5,000 for “hard to fill” areas like math and science. Schools in Stanly County, North Carolina are also offering up to $10,000 for new hires.

A number of states are promoting jobs in health care, combating a shortage that still exists from the pandemic in which nurses especially have been in high demand.

See: 5 Things To Consider Before Taking a Job With a More Junior Title
Find: 15 Best Work-From-Home Jobs for Retirees

In New York, Gov. Kathy Hochul has earmarked $1.2 billion to help provide funding to recruit new health care workers, providing up to $3,000 bonuses when hired. And Washington is offering up to $15,000 to help amend the shortage of nurses, radiologists and psychologists, according to Business Insider.