When To Consider Job-Hopping To Maximize Your Pay 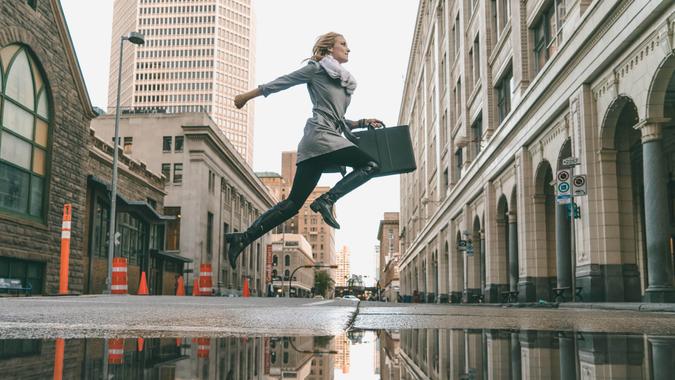 If you’re in search of a fatter paycheck, switching jobs may seem like the optimal move. There’s a sense that you can get a bigger pay bump by leaving your company for greener pastures than by getting promoted internally — but this perceived bump might not be as big as you think. ADP’s Workforce Vitality Report for the fourth quarter of 2020 found that job holders saw their wages increase by an average of 4%, while job switchers saw their wages increase by an average of 5%. For an extra 1% increase, is it really worth it to switch jobs?

Find Out: What It’s Like To Job Hunt During a Pandemic
Take a Look: Handshakes and Other Office Rules Changed by COVID-19

Before jumping ship, Kyle Elliott, career coach and founder of CaffeinatedKyle.com, suggests talking to your current employer about a possible pay increase.

“Many employees make the mistake of hopping jobs to land a pay increase without first speaking with their current employer about their unhappiness,” he said. “While an internal promotion or pay raise is not always possible, take time to speak with your supervisor about available internal options. If a raise is out of the question, discuss what other remuneration options your current employer may be able to provide you.”

Read More: 6 Career Mistakes To Avoid During an Economic Downturn

If it turns out they aren’t willing to budge, it may be time to look for new opportunities. Here are some other signs that job-hopping may be your best pathway to a bigger payday.

Your Company Has a History of Being Stingy With Pay Increases

“The best predictor of future behavior is past behavior,” said John Roccia, director of career services at Ama La Vida. “Look at the promotion tracks in your current company and understand that you aren’t likely to break them. If your company values seniority or tenure over merit, or never deviates from a set schedule of promotions and raises, then you’re not likely to be the first person to change their mind. In that case, a new opportunity may be the best bet for your career.”

Be Aware: 5 Things To Negotiate at Your Job Other Than Salary

“If you’ve picked up many new skills in a short period, then you may have ‘outgrown’ your role, and you’re likely to be stifled if you wait for them to catch up,” Roccia said. “Have a conversation with leadership about taking on more responsibilities, but if they’re not supportive, then it may be time to look elsewhere.”

Options: Companies That Let You Work From Anywhere

You’re Making Less Than Others in Your Field

“Pay attention to your peers,” Roccia said. “If you network well within your industry and you get the sense that most other people are being paid more than you while maintaining comparable levels of stress, workload and satisfaction, then it’s time to line up a few informational interviews to assess your options.”

Worth Checking Out: 45 Jobs That Can Make You a Millionaire Before Retirement

You Don’t Have a History of Job-Hopping

Career changes are common, but if you’re someone who tends to switch jobs every year or so, it may end up harming you in the long run.

“Many employers are much less likely to hire a candidate who appears to be a frequent job hopper,” said David Magnani, managing partner at M&A Executive Search. “You lower your potential value to a new company if they perceive that they may train and grow you, but you will leave when the next big offer comes your way. To maximize your long-term earning power, you are better off establishing longer tenures (e.g. three-plus years) with companies, especially early in your career. So even if there are clear reasons for making a job hop to increase your short-term earnings and position, you are likely better off staying with your current employer for an additional year or two.”

If, however, you have had long tenures at previous jobs and you get a great offer elsewhere, job-hopping may be in your best interest.