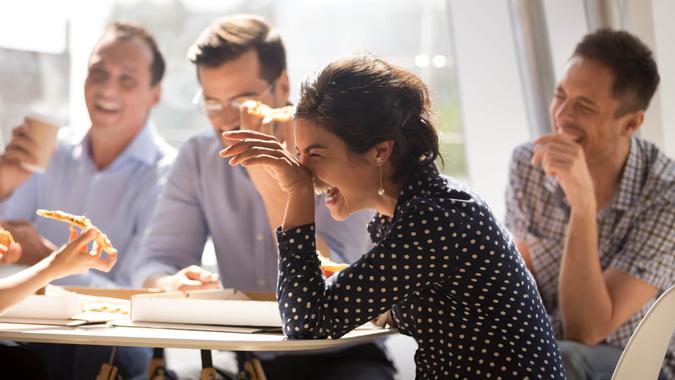 Just as the world adjusted to remote work during COVID, some companies and their workers are now adapting to another new trend: the four-day workweek.

Some companies — like translation service Getit in Warsaw, Poland and San Francisco based e-commerce firm Bolt — have been using a four-day workweek since last fall, while others are just introducing the concept.

See: 20 Genius Things Mark Cuban Says To Do With Your Money
Learn: How To Get Rich With a Normal Job

Since virtually everything about the traditional office seems to be changing post-pandemic, it’s a logical time to shift the workweek as employees return to the office. In fact, it may even help entice some employees to return to work. One study from Maru Public Opinion, conducted for the American City Business Journals, showed that 82% of American full-time workers would be willing to shift to a workweek of four 10-hour days.

Gareth Hoyle, managing director at digital agency Marketing Signals, announced last week on LinkedIn that his company just transitioned to a four-day work week. The post received more than 25 million impressions in less than seven days, with many people commenting that they wanted to apply to work at the company. This lends credence to Hoyle’s claim that the four-day work week will act as a recruiting hook for “future superstars” at the agency.

Caryn Cridland, a psychologist and expert workplace mediator, commented on a follow-up thread from Hoyle that the four-day work week is “the ultimate in work-life balance.” She wrote, “Extra rest for staff = increase well-being and engagement = high performance. Win – win!”

In his post, Hoyle explained how his company structured the four-day work week by dividing his team into two groups so the company has five-day coverage. On week one of every month, one group works Monday-Thursday with Friday off and the next week, they work Tuesday-Friday, giving people two “normal” and two “extra long” weekends each month, Hoyle wrote. The other group follows the opposite schedule.

Pay and benefits remain the same, but the workdays increased by 30 minutes, resulting in a 32-hour work week instead of a 37.5 hour work week. In his post, Hoyle noted that the company already offers employees flex-time in their daily hours and measures our teams “based on output not attendance.”

He is expecting increased productivity and a “happy and loyal team.”

Workers from other companies are also adjusting to a four-day workweek. Sales leader Chris Hinkle noted in a LinkedIn post that the four-day workweek creates a sense of urgency. “I’ve always considered myself one who works efficiently,” he wrote. “But when you have four days your week goes by quick. Even if you’re proactive it takes it up a notch.”

As the trend continues, workers may have to get used to associates and vendors having different hours of availability. Ultimately, a four-day workweek could help alleviate the effects of the Great Resignation, boost productivity and give employees a better work-life balance.

Tech company Bolt, now roughly six months into the program, found that, after the three-month trial period, 94% of employees and 91% of managers wanted to continue with the four-day week.

“I couldn’t imagine running a company any other way,” founder and CEO Ryan Breslow told CNBC.com.