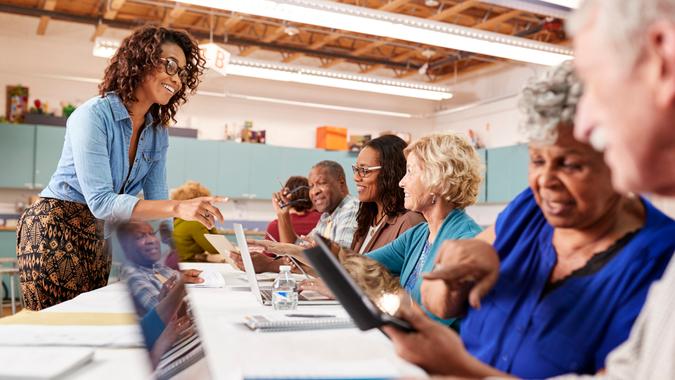 Older workers will get taught some new tricks over the next couple of years thanks to a partnership between Google and the AARP to help people ages 50 and over improve their digital and technology skills. The collaboration is designed to help older employees stay competitive in the modern labor market — and maybe ease the labor crunch facing many U.S. employers.

See: Older Workers Were Forced Into Big Decisions During the Pandemic — Here’s What To Know
Find: Semi-Retirement: The New Job Trend Among Baby Boomers

The AARP Foundation is teaming up with Google’s philanthropy arm, Google.org, to implement the program. Much of the training will target women, lower-income employees and people of color, CNBC reported.

About 25,000 workers will take part in the program, called Digital Skills Ready@50+. It will kick off in these eight states over the next two years: Arizona, Georgia, Illinois, Louisiana, North Carolina, Pennsylvania, South Carolina and Texas.

Training will consist of foundational courses that unfold over a five-week period, including the following areas:

Participants will also take part in workshops that teach them how to use LinkedIn, Venmo and other tools, AARP said on its website. In addition, the program will offer lectures on topics ranging from how to choose a new computer to using social media for job searches. Those with an entrepreneurial bent will have access to sessions on social media marketing, crowdfunding, mobile payment services and graphic design.

“We think the digital skills are critical for this era and the opportunities that are being created by new technologies should be available for everyone in any city, in any state and at any age,” Kent Walker, president for global affairs at Google, told CNBC.

AARP plans to monitor and evaluate the program to gauge its success in helping participants improve their incomes and employment prospects. If it does prove successful, the program might be expanded nationally.

Improving the tech skills of older workers could also help employers fill positions in a labor market that had 10.6 million job openings at the end of November, according to the U.S. Bureau of Labor Statistics.

See: Retired or Retiring and In Debt? Here’s How To Manage It
Find: 7 Easy Ways Every Boomer Can Catch Up on Retirement Savings

As GOBankingRates recently reported, many of those exiting the workforce are older, more experienced employees, which has left companies with a massive skills gap that can’t be filled with entry-level workers. One potential way to fill that gap is by training 50-plus workers on the skills that can help them fill some of those roles.