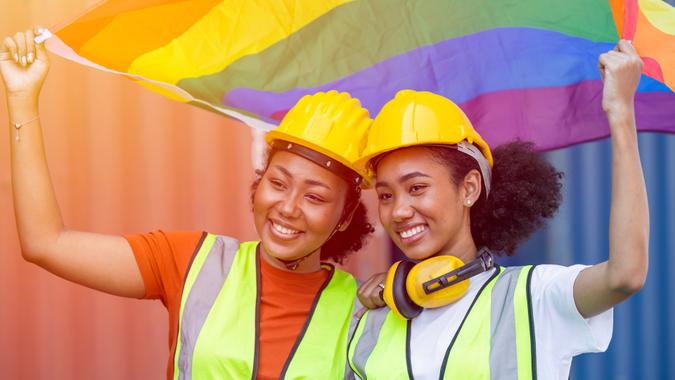 LGBTQ+ Social Security: What Survivor Benefits Are You Eligible For?
Find: 8 Expert Money Tips for the LGBTQ Community

A new Glassdoor study shows that while there has been progress in diversity and inclusion efforts in the workplace and despite advances in equal rights for Americans who identify as LGBTQ+, there is still a significant gap in the workplace experiences of LGBTQ+ employees.

In terms of industries providing LGBTQ+ employees with a more welcoming workplace culture than others, the top three are real estate, information technology and legal.

Production-based industries follow with construction, repair and maintenance services, at the number four spot, and energy, mining and utilities at the number five.

On the other hand, the lowest-rated industries for LGBTQ+ employees are primarily service industries, with the top three including retail and wholesale, restaurants and food service, and personal consumer services. These are followed by healthcare and manufacturing, the study shows.

So which companies received the highest rating overall?

Glassdoor notes that LGBTQ+ employees make up a substantial minority of the American workforce, with 13% of employees in its overall data, and as much as 23.1% in certain industries.

Discover: 4 Employment Barriers That Still Exist for LGBTQ Workers
Learn: How To Pay for Therapy and Other Care (and How To Make It Affordable)

“But it is still very much the case that, in 2022, LGBTQ+ employees face unique challenges and barriers in the workplace. This not surprisingly makes their employee experience less satisfactory compared to peers who do not identify as LGBTQ+,” according to the study. “Ultimately, Glassdoor data shows that there is still much progress to be made when it comes to fostering an inclusive workplace for LGBTQ+ employees.”