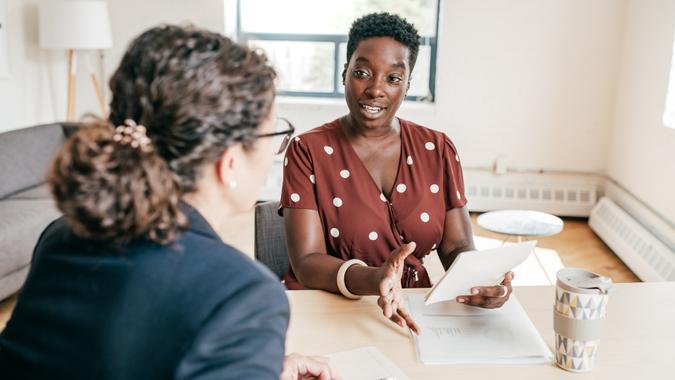 The Great Resignation, or The Great Reshuffle, is giving jobseekers more leverage for negotiations. With the job market still being very tight and a shift in life priorities, 80% of Americans now say it’s acceptable to leave a new job before six months if it doesn’t live up to your expectations, according to a survey.

The survey, by The Muse, also noted that 41% would give a new job two to six months if they felt “Shift Shock” — that feeling when you start a new job and realize, with either surprise or regret, that the position or company is very different from what you were led to believe as a new hire.

While resume gaps and short-lived work experiences used to be problematic for candidates, the pandemic and the way we think about work seems to have produced a shift in that area, as well.

Stephanie Lovell, Head of Marketing at Hirect, told GOBankingRates that “the good news is, I don’t think short-term stints in your work history are automatically assigned red flags during the hiring process as they may have once been.”

“For us at Hirect, with a lens into the tech and startup sectors in particular, it’s quite common and acceptable for candidates to lend their skills and expertise on a project-by-project basis or to support a limited period of growth within a young business,” Lovell said.

The best way to address this, if the position simply wasn’t a good fit,  is to be honest and sincere while sharing a few succinct reasons why your departure was necessary, she explained. In an interview setting, it can take some finessing as to how to best position your time if you’ve moved on after just a few months.

Lovell added that as gratifying as it may be, resist the urge to go scorched earth on a former employer if your departure was contentious — this will do little to ingratiate yourself with any hiring manager.

“Instead, focus on positive contributions you made during your short time, goals or milestones you helped achieve, and key learnings you can bring to this new role that will support the organization,” Lovell said.