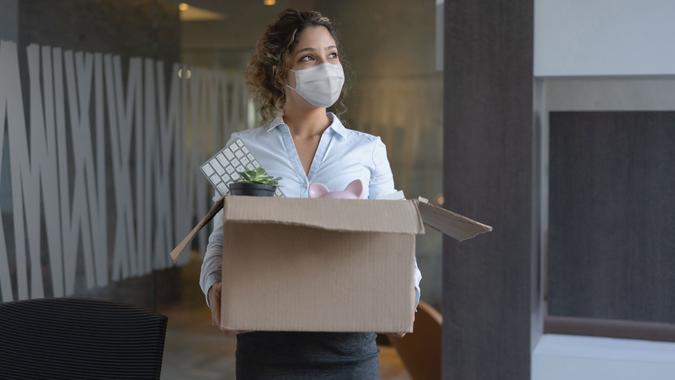 A record 4.4 million Americans quit their jobs in September, with the biggest increase coming from the arts, entertainment and recreation industries, according to the Labor Department’s Job Openings and Labor Turnover Survey (JOLTS) report that came out on Nov. 12.

Let Us Know: Is Inflation Affecting How You Spend Your Money?
Explore: Is Your Unemployment Income Refund Taxable?

The number of job openings was little changed at 10.4 million, demonstrating the tight labor market, underscored once again by the discrepancy between demand and willing workers — what many are calling “the Great Resignation.”

The new record follows August’s 4.27 million quits. The quits rate as a percentage of the labor force was 3% (also a record), according to the Labor Department. Quits increased in “other services” and state and local government education, as well.

For one of the few times in history, there have been more open positions available than there have been willing workers to fill them. Recent jobs reports have shown a slight improvement in the retention level of workers for the past two months, but unemployment still remains relatively high compared to pre-pandemic levels.

More: A Look at Unemployment Numbers in Every State

Jeanniey Walden, labor market expert and CMO of DailyPay, told GOBankingRates that, overall, there’s still a massive imbalance in the U.S. labor market, as the economy — especially consumer spending — has recovered and employees’ concerns over COVID and the Delta variant have faded.

“Companies have looked to ramp up business again and, in doing so, need to hire more employees. However, the biggest shift coming out of the pandemic is that the labor participation rate has remained stubbornly low, while jobs have effectively returned to pre-pandemic levels. There’s speculation that the pandemic-driven decrease in labor participation rate is permanent,” Walden said.

This low labor supply/high hiring demand has led to a hyper-competitive hiring environment for companies, Walden added. “Instead of trying to attract unemployed individuals to jobs, they’re instead luring employed workers by offering improved benefits, higher pay, etc. This is likely why you’re seeing this “quits” number rise. Those workers are likely leaving for jobs that are offering things like better benefits, higher pay and/or better working conditions,” she added.

Learn: More Than 40 Percent of Caregivers Might Be Forced to Quit Jobs Instead of Returning to the Office, Study Finds
Find: Pandemic Unemployment Shows Gig Drivers Need to Be Considered for US Social Safety Net

Walden said that September is the beginning of seasonal hiring, so that may have also prompted more competition — hence more job openings.