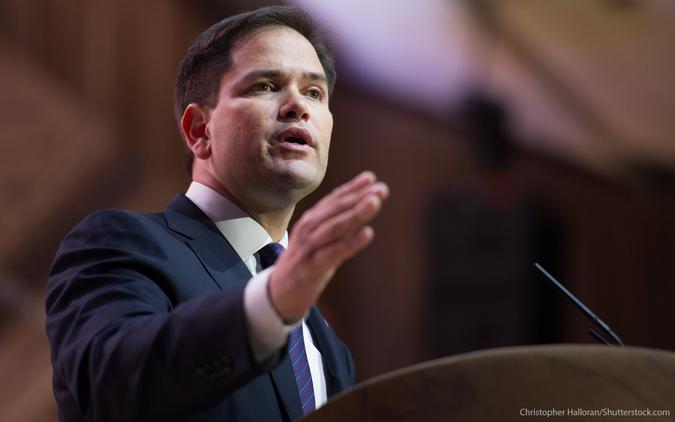 In an op-ed published in USA Today, Florida Sen. Marco Rubio announced his support for Amazon workers who are trying to unionize.

See: Do You Think the Minimum Wage Should Be $15? Take Our Poll
Find: Biden Backs Historic Amazon Warehouse Workers’ Vote in Alabama

“For the past several years, Amazon has waged a war against working-class values. The Silicon Valley titan uses anticompetitive strategies to crush small businesses, bans conservative books and blocks traditional charities from participating in its AmazonSmile program. Not surprisingly, it has also bowed to China’s censorship demands,” Rubio wrote in the op-ed.

“Amazon may be headquartered in America, but it considers itself a citizen of the world,” Rubio added in the op-ed.

The workers are employees of the Amazon fulfillment center in Bessemer, Alabama, and they are voting to form a union with the Retail, Wholesale and Department Store Union, which represents 100,000 members throughout the United States.

See: 30 Most Powerful Unions in America
Find: A Stark Look at the COVID-19 Job Class Divide, One Year Later

Stuart Appelbaum, president of the RWDSU, which is conducting the unionization drive for the workers at the Amazon fulfillment center, said in a statement this morning that, “We welcome support from all quarters. Senator Rubio’s support demonstrates that the best way for working people to achieve dignity and respect in the workplace is through unionization. This should not be a partisan issue.”

According to a statement from BAmazonUnion, an organizing campaign of the Mid-South Council of the RWDSU, having a union at Amazon would give employees the right to collectively bargain over working conditions including items such as safety standards, training, breaks, pay, benefits and other important issues that would make the workplace better.

“Amazon sometimes addresses issues at work but it’s all temporary. A union contract is in writing, negotiated upon, and Amazon would need to legally follow the guidelines and there are mechanisms to hold them legally accountable to us as workers. There’s no other way to have this type of relationship with Amazon outside of having a union,” the campaign says on its website.

See: The 10 Most Common Jobs in America — And How They’re Holding Up During the Pandemic
Find: Essential Jobs Across America With Big Paychecks for Employees

In his op-ed, Rubio says that even after historic market gains, “its corporate leadership fears the prospect of its workers having an increased say in working conditions, so it’s looking to crush the union vote.”

“For decades, companies like Amazon have been allies of the left in the culture war, but when their bottom line is threatened they turn to conservatives to save them. Republicans have rightly understood the dangers posed by the unchecked influence of labor unions. Adversarial relations between labor and management are wrong. They are wrong for both workers and our nation’s economic competitiveness. But the days of conservatives being taken for granted by the business community are over,” Rubio writes.

“Here’s my standard: When the conflict is between working Americans and a company whose leadership has decided to wage culture war against working-class values, the choice is easy — I support the workers. And that’s why I stand with those at Amazon’s Bessemer warehouse today,” he adds.

See: How the Coronavirus Outbreak Is Devastating the Livelihood of Hourly Workers
Find: How Emergencies Like Coronavirus Expose Nonsense Business Practices

It’s not the first time this year that Amazon is facing issues about its working conditions.

In the court papers filed in February, James said that throughout the historic pandemic, Amazon has repeatedly and persistently “failed to comply with its obligation to institute reasonable and adequate measures to protect its workers from the spread of the virus in its New York City facilities.”

“Amazon’s flagrant disregard for health and safety requirements has threatened serious illness and grave harm to the thousands of workers in these facilities and poses a continued substantial and specific danger to the public health,” the lawsuit claimed.