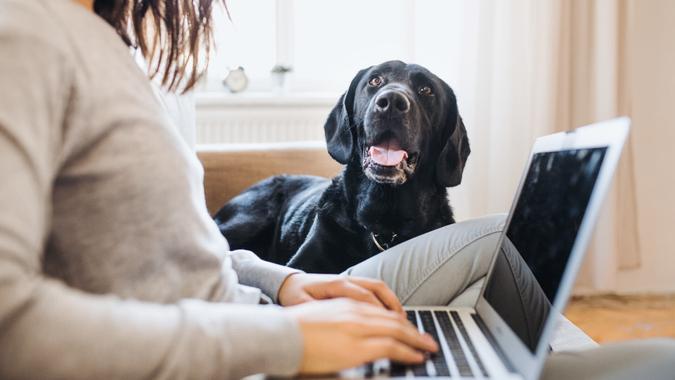 There’s a very furry vibe running through the working world post-COVID, at least in offices that are filling up with employees again now that nearly all pandemic restrictions have been lifted.

A rising number of businesses have changed their pet-at-work policies in response to demands from employees who grew attached to their dogs and cats while working remotely the last couple years, according to a new survey from Barkbus, a luxury mobile dog grooming service.

The survey of 1,057 employers and workers found that internet searches for workplace pet policy templates surged 400% over the past year, and 71% of employee respondents said their employers had updated their pet policies. Small businesses were 55% more likely than large ones to have changed their pet policies in the past year, but even huge corporations like Amazon, Google and Nestle’s Purina let employees bring pets to work.

This shift was very much influenced by the COVID-19 pandemic, especially in terms of dogs, who are much less adaptable than cats to being left home alone. As the Barkbus report noted, dogs “started living their best lives” during the pandemic’s spike in remote working.

“Instead of being in crates during the workday, they were on our laps, getting frequent walks, soaking up the snuggles, and bonding with their best friends,” the report said. “Working from home, pet parents and their four-pawed children finally got to spend mass amounts of quality time together.”

Now that many employers have scaled back remote working, workers want to continue that bonding at the office. Among the Barkbus report’s key findings:

Pet-friendly work environments are so important to workers that many prioritize pet policies over just about everything else. As GOBankingRates previously reported, another survey conducted by OnePoll found that about 60% of pet owners have left jobs since the beginning of the COVID-19 pandemic because they returned to offices that didn’t do enough to accommodate pets. Seven in 10 respondents said they’re willing to accept a pay cut if it means they can bring their pets to work.

According to the Barkbus survey, more than one-third (36%) of pet parents want to have their dogs at work with them every day. A similar percentage (34%) would settle for designated doggy days at the office, while 29% said they would at least like extra breaks to check on their dogs at home.

Beyond allowing dogs at work, nearly one-third of respondents (31%) said they would like to see their employers add pet insurance to their employee benefits package. Many also support a stipend for doggy day care, dog walking or “pawternity” leave that lets workers stay home and care for sick or newly adopted pets.