The importance of so-called soft skills in the office has long been in dispute among managers. Sure, having co-workers who listen and communicate well is important, but it’s clearly a secondary consideration when compared to the sort of hard skills that really affect the bottom line, right?

Turns out, an increasing body of evidence is challenging that traditional perspective on what really matters for an efficient workforce. Take for instance a year-long effort to teach soft skills to textile workers in Bangalore, co-authored by Namrata Kala of MIT Sloan. Kala’s finding revealed that the soft skills training offered at the factory ultimately produced a return on investment (ROI) of roughly 250 percent after just one year — a financial return that can hardly be labeled “soft.” When you look at information such as these findings, there’s a reason to believe soft skills can actually be among the most important skills in the workplace.

What Are Soft Skills?

Soft skills are often defined in contrast to hard skills, which are related to the specific skill set required to do the job in question. Soft skills, meanwhile, have the appearance of being tangential to the task at hand but still helpful, like communication abilities or a talent for teamwork and collaboration.

So, if you’re working as a cashier at a grocery store, your knowledge of how to use the register and your ability to scan items quickly and efficiently would represent hard skills, whereas your ability to coordinate with co-workers or chat up the customers would be considered soft skills.

Why Soft Skills in the Workplace Are Important

Of course, as important as hard skills are, soft skills at work might ultimately be just as — if not more — important. Take for instance an internal study by Google in 2013 — dubbed Project Oxygen — that reviewed all available data in an attempt to determine which skills and characteristics were most predictive of success at the company and which proved to be the most valuable.

Even at Google, a company built around the idea that hard engineering skills like coding and mathematics are what truly define success, STEM expertise finished last among the top eight characteristics of Google’s best employees. The top seven? You guessed it: all soft skills. The seven characteristics that won out were being a good coach, communicating and listening well, possessing insights into others, having empathy toward colleagues, being a good critical thinker and problem solver, and being able to connect with others across complex ideas.

Those results were further bolstered more recently at Google by Project Aristotle which reviewed which teams were producing the best results. Once again, the assumption that the A-teams stocked with top scientists would produce the best results was challenged by the data as some of the strongest new ideas were coming from B-teams that offered less STEM expertise but stronger soft skills.

Find Out: The Most Important Skill at the Office Isn’t Being Taught in School

Soft Skills Can Bring in the Money

If you assume the rewards of soft skills are not involved in improving a company’s bottom line, the MIT Sloan study proves otherwise.

The sort of garment assembly lines involved in the study — where workers would be performing repetitive tasks — would seem to be a picture-perfect example of a workplace where hard skills would easily trump soft ones. However, even in that context, the financial case for developing soft skills was extremely strong. As noted above, the ROI of the programs was 250 percent, and that was largely due to improvements in productivity.

So, in this example, the data would seem to support the idea that hard skills — rather than being independent of soft skills — are actually closely linked to soft skills, with improvements in soft skill development ultimately creating significant gains in hard skills.

Soft Skills Can Lead to a Better Workplace for Employees

What’s more, it would appear that the gains in productivity in the study were driven by making the workplace a better place for employees. Not only were employees producing more in the same amount of time after soft skills training, but they saw marginal increases in their wages, had better opinions of themselves, were more likely to take advantage of government programs, saved more for their children’s’ education and were even more likely to request more training in hard skills.

The age-old approach to managing an office or a factory floor would tend to indicate that hard skills are what really matter when wanting to achieve the end result. After all, just the nomenclature would appear to reflect that in deeming “hard” skills as being somehow more solid and tangible than the alternative.

However, that approach is looking increasingly outdated the more people learn about the importance of communication and worker satisfaction in producing “hard” results. So rather than thinking of hard and soft skills independently of each other, it appears that improving soft skills can lead to a growth in hard skills, which you might want to keep in mind when looking for ways to improve your chances of getting a job. 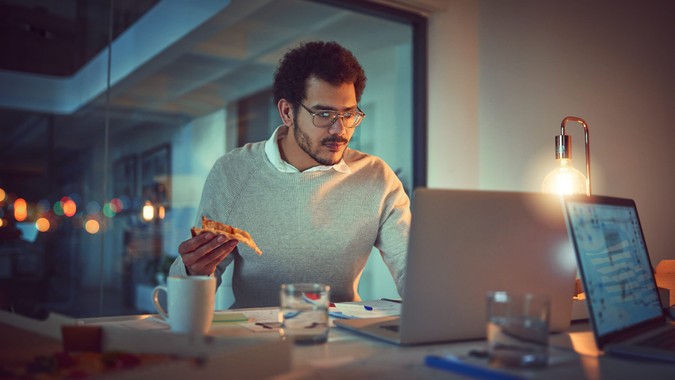 Why Staying Late at the Office Is Killing Your Career

A case for ditching overtime.