New Study Shows Drastic Difference in How Gen Z and Millennials vs. Boomers Talk to Friends About Their Salaries 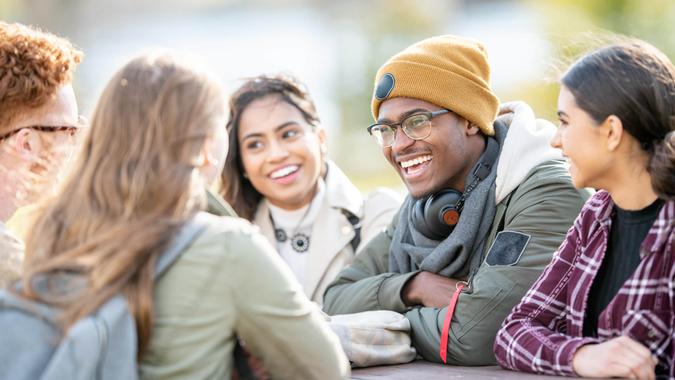 Your grandmother may have told you it’s rude to talk about money, but Gen Z isn’t buying it.

Check Out: 22 Side Gigs That Can Make You Richer Than a Full-Time Job
Explore: Your Biggest Money Etiquette Questions Answered

“Older generations were taught not to talk about money and that the subject itself is taboo,” said Elaine Swann, an etiquette expert based in San Diego. “Younger people tend to be much more open about all sorts of things – everything from how much they paid for something to how much they make.”

Here’s a closer look at the differences between the generations.

This greater openness may be a reflection of the high level of concern younger people have about money. According to another recent survey, cost of living is the No. 1 concern among Gen Zers, while almost half of both Gen Zers and millennials worry that their income won’t cover their expenses.

And when something is on their mind, these generations are all about sharing. “Social media has had a big impact on people’s level of sharing,” Swann said. “They share their food, their emotions, all of the different milestones in their life; they share mundane portions of their life, and because they have this practice of sharing on social media, the spectrum of the topics that they do share has widened, and money is included in that spectrum.”

The survey data also revealed that it’s not just close friends that young people are talking about salaries with. An even larger number of respondents ages 18-24, 39%, said they’ve asked their coworkers how much they earn.

Danetha Doe, creator of Money & Mimosas and chief economist at Clever Real Estate, suggests that Gen Z’s greater degree of openness around money conversations may not persist as they age. “As the Gen Z population gets older and earns more money in their careers, I’ll be curious if the percentage who ask about salaries will remain the same, decrease, or increase,” Doe said. “Currently, I don’t believe we can compare Gen Z to Millennials because salaries are likely different.”

The Good It Can Bring

Transparency around salaries has gone through an upheaval over the last several years. Younger job seekers fighting back against pay inequality are demanding to have this information upfront.

Women still make just 82 cents for every dollar that men make, according to the U.S. Bureau of Labor Statistics. For women of color, the wage gap is more staggering. For every white man’s dollar, black women earn 64 cents, and Hispanic women earn just 57 cents.

“When things were very tight-lipped and people didn’t share, that’s why we have the disparity that exists today,” Swann said.

The so-called Great Resignation and its subsequent worker shortages have given employers little choice but to acquiesce. A growing number of states have passed laws requiring employers to include salary information in online job postings. A recent study by the Pew Research Center found that the wage gap for younger workers ages 25-34 in 2020 was the smallest of all age groups.

“Much of this gap has been explained by measurable factors such as educational attainment, occupational segregation and work experience. The narrowing of the gap is attributable in large part to gains women have made in each of these dimensions,” the study said.

Swann feels that the old adage that it’s not polite to talk about money is etiquette advice for a bygone era and that the shift toward more openness is a good thing. “I think it’s helpful to have these conversations with our coworkers and friends,” Swann said. “It helps empower others to ask for what they rightfully deserve.”

Doe agrees. “Gen Z folks are having direct conversations about wage inequality in ways that previous generations did not,” she said. “They understand that economic equity is necessary for societal peace.”

Methodology: GOBankingRates surveyed 1,004 Americans aged 18 and older from across the country between July 21 and July 24, 2022, asking nine different questions: (1) How much do you tip when restaurant service is bad?; (2) How much do you tip when restaurant service is good?; (3) How much do you typically spend on a wedding gift?; (4) When going out to dinner with a large group, how do you split the check?; (5) Have you asked your closest friends how much money they make?; (6) Have you asked co-workers how much money they make?; (7)
If you loan a family member money, do you expect them to actually pay it back?; (8) Have you ever hidden a large purchase from your partner or spouse?; and (9) Which service workers do you regularly tip? (Select all that apply). GOBankingRates used PureSpectrum’s survey platform to conduct the poll.