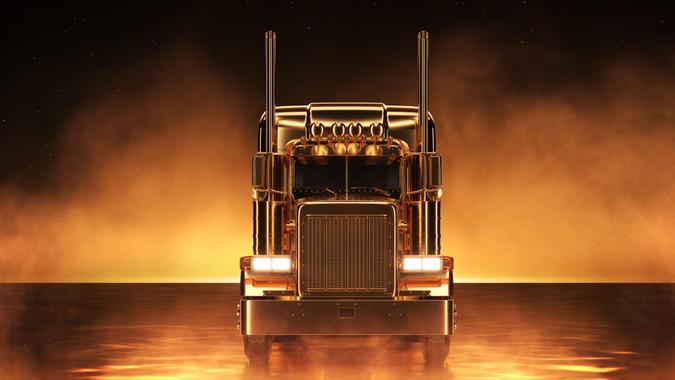 If you’re driving down the highway and see an 18-wheeler rumble past with nobody in the driver’s seat, relax, it’s not just your imagination. Self-driving trucks could one day find their way onto public roads as shipping and tech companies search for ways to deal with a driver shortage that has contributed to supply chain delays across the globe.

Among the companies testing robot-controlled, self-driving trucks are J.B. Hunt Transport Services Inc., FedEx and the freight division of Uber Technologies, Bloomberg reported. The technology is being explored because shipping companies can’t find enough human drivers — a seemingly unsolvable problem that has led to both supply chain logjams and runaway inflation.

As previously reported by GOBankingRates, many drivers have left the profession over COVID-19 concerns. The International Road Transport Union estimates that roughly 20% of all professional truck driving jobs are unfilled worldwide despite higher wages being offered. According to the American Trucking Association, the U.S. truck driver shortage equaled at least 80,000 people in 2021.

One obvious remedy is trucks that can operate without people behind the wheel. That probably won’t happen anytime soon, though. As Bloomberg noted, self-driving trucks are likely years away from winning regulatory approval. Even so, advocates of the technology consider it a long-term solution to an ongoing labor challenge.

Even when there are enough human drivers, trucks aren’t being optimally utilized because of all the down time drivers require to eat, sleep and take breaks.

“What that leads to is enormous underutilization of these trucks and much slower movement of goods.” Sterling Anderson, co-founder of Aurora Innovation, told Bloomberg. His company began testing driverless truck software last month in partnership with Uber Technologies’ logistics arms.

But it won’t be easy convincing lawmakers, regulators and ordinary Americans that 40-ton trucks should be hauling down the highway with no driver at the wheel. Legislation that would start the process of getting driverless vehicles on the road has stalled in Congress.

And road safety advocates envision a nightmare scenario if the roads become packed with driverless vehicles.

“What we see playing out on roads with some cars claiming to have self-driving capabilities crashing into barriers and people is giving people some pause,” Cathy Chase, president of Advocates for Highway and Auto Safety, told Bloomberg. “We should not be putting test products on the roads.”

But that hasn’t stopped technology companies from moving forward with research and development. TuSimple Holdings recently announced that it completed the first fully autoomous semi-truck drive on open public roads on Dec. 22, 2021. The truck traveled 80 miles on public roads without a human driver from Tucson, Ariz. to the Phoenix area.