What Will Happen to These Cities If Remote Work Becomes the Norm? 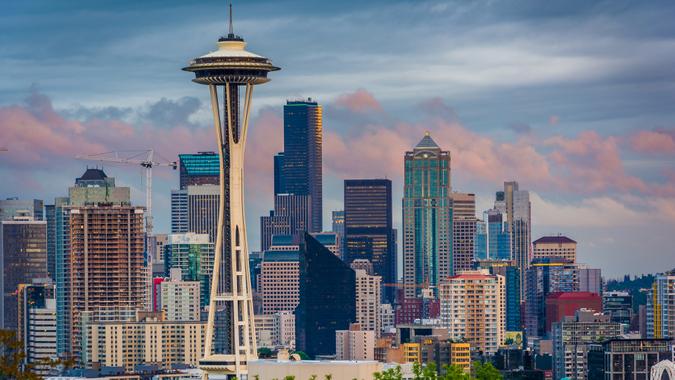 Due to the pandemic, for many companies, remote work is part of doing business — at least for now. Buffer’s 2021 State of Remote Work report, which includes responses from over 2,300 remote workers, found that of the 45% of respondents who reported being in remote working situations due to the pandemic, 46% of those said that their companies were planning to permanently allow remote work.

While there are many positive benefits to allowing employees to work remotely on a permanent basis — like gains in productivity, performance, engagement, retention and profitability, according to a statistical analysis by Forbes — some downsides exist, too, such as companies reducing their physical footprints, which means less foot traffic from workers in the urban areas these companies are located.

“The last 12 months have seen a seismic shift in the preferences and demand of businesses looking for office space,” said Teresha Aird, managing director at Offices.net. “Numerous large businesses have moved to repurpose or sublease unused space in order to recoup funds, resulting in increased vacancy rates in line with additional supply.”

See: How Major Tech Companies Change the Cities They Moved To

So if large numbers of workers employed at a company no longer come to a city and instead work remotely, what will happen? It depends on the circumstances.

To give you an idea, here’s a look at two cities that serve as homes to major companies and the future impact a shift to remote work may have.

“In Seattle specifically, major companies such as Amazon and Microsoft are looking to institute hybrid work solutions that allow employees to work remotely or in office depending on their own personal preferences,” Aird said. “Expect to see Seattle remain as the major hubs for these companies, despite the increased number of remote workers. A lot of the businesses I have had discussions with since the start of the pandemic are eager to retain their physical spaces (albeit downsized) — as a space to meet, train, socialize and collaborate — moving forward.”

Check Out: These 15 Billionaires Got Richer During The Pandemic

In October 2020, Kathleen Hogan, the executive vice president of Microsoft, offered this insight to Microsoft employees, according to a post on The Official Microsoft Blog:

“We recognize that some employees are required to be onsite and some roles and businesses are better suited for working away from the worksite than others. However, for most roles, we view working from home part of the time (less than 50%) as now standard — assuming manager and team alignment.”

So while Microsoft is shifting to remote work as a standard, employees would still go into the office more than 50% of the time.

More: When These Big Companies Are Planning To Return To the Office

Seattle isn’t the only location where big companies are decreasing the amount of real estate they’re utilizing due to remote working situations. In March, Bloomberg reported that New York-based bank JPMorgan Chase & Co. was making moves to sublet approximately 700,000 square feet of office space in the Financial District and more than 100,000 square feet in the Hudson Yards area.

And in an April 7 letter to shareholders, Jamie Dimon, CEO of JPMorgan Chase, stated that the bank will significantly reduce its need for real estate by allowing some employees to split their work time between office and home, while a small percentage, around 10%, would be allowed to work from home on a full-time basis. According to Dimon, for every 100 employees, only 60 desks will be needed on average.

Of course, Dimon also included in the letter that the decisions — like having a certain percentage of employees work from home or embracing a hybrid model — depend on what is best for the company and if that perspective shifts, then so may the decisions. So how this will all work out remains to be seen.

Read: Companies That Let You Work From Anywhere

Is a Shift To Remote Work by Big Companies Good or Bad for Major Cities?

Stacey Kane, business development lead at Easy Merchant, had this insight on what a shift to working remotely and reducing real estate footprints (such as in New York and Seattle) may do:

“The longer big corporations realize the irrelevance of real estate in running a business, the more likely it is that implementing remote work setups will set off a chain of immense impacts on the global economy,” Kane said. “These giant businesses and firms collectively employ a significant number of workers; their employees are the foot traffic that powers smaller enterprises within the area. Their permanent shift to remote working can seriously cause a decline in performance and sales of food establishments, transportation, etc. — even hotdog vendors and burger stalls that solely rely on customers that come out of corporate buildings will most likely be put out of business.”

But Aird’s outlook isn’t quite so bleak:

See: 18 Restaurant Chains That Have Filed For Bankruptcy

“Ultimately, whilst notions of a ‘typical’ workspace may be changed forever as a result of the pandemic, we expect larger businesses to retain their spaces in major cities such as Seattle, New York, Chicago and Los Angeles,” she said. “With hybrid workspaces becoming more and more common, don’t be surprised to see workplaces shift more toward a flexible model that allows employees to come and go as they please depending on what’s required on the day.”

For now, speculation overrides any certainty about the future of these cities, but hopefully, any permanent remote work shifts won’t take a devastating bite out of their economies.