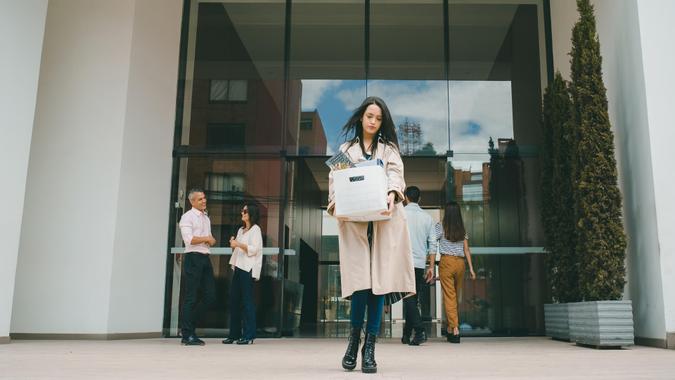 As people continue to return to the office amidst the surging Delta variant, more employers are requiring employees to get the COVID-19 vaccination or risk losing their jobs. However, if you are fired for refusing to get vaccinated, the company has the right to terminate your employment for violating company policy. And, if you refuse to get one and quit or are terminated, you won’t be eligible for unemployment benefits.

See: Google, Netflix and More To Require Vaccines for Workers — Is Your Company on This Growing List?
Find: NYC Is First in the Nation To Require Proof of Vaccine for Most Indoor Activities — How Will It Affect Businesses?

To receive unemployment benefits, most individuals must prove that they are out of work through no fault of their own. Unemployment benefits may also be unlikely if one quits due to vaccination refusal, although state workforce departments are able to make changes to that eligibility requirement.

“Typically, an employee who is terminated for failing to comply with company policies is not eligible for unemployment benefits, which would include refusing to comply with a company’s COVID-19 prevention policies, masking requirements or vaccine requirements,” Alana Ackels, a labor and employment lawyer at Bell Nunnally, a Dallas-based law firm, told MarketWatch.

Rebecca Dixon, executive director at the National Employment Law Project, told MarketWatch that an employee who has proof of a medical exemption or religious objection to receiving the vaccine may still be eligible to collect unemployment benefits if terminated.

The New York Times reported that other large companies — including Facebook and Google — have said they will require employees to be vaccinated in order to return to the office. Some companies, including The Washington Post, have made vaccination a condition of further employment; however, few have given details about the consequences of violating vaccine requirements.

See: United Airlines Is Industry First To Require All Employees To Be Vaccinated Due to Delta Surge
Find: Stimulus Update: States Give Out Thousands of Bonus $1,000 Checks – Will You Get One?

“This could lead to tens of thousands of people across the United States without work or access to unemployment benefits because they refuse to get vaccinated,” Ronald Zambrano, employment law chair at West Coast Trial Lawyers, a Los Angeles-based law firm, told MarketWatch.