The 10 Most Expensive Art Pieces Ever Sold at Auction 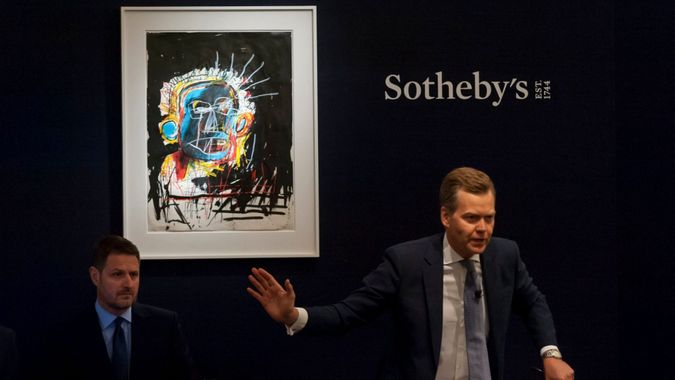 If you’ve ever followed art auctions, you know that the selling prices of highly coveted pieces can be quite astounding — some of which have skyrocketed into hundreds of millions of dollars. To give you some context on why these pieces sell for so much, GOBankingRates interviewed Pete Uhl, senior art consultant at Marcus Ashley Gallery.

“Many of the pieces … all have long histories of exchanging ownership, whether originating from a private sale or a deal within a family estate collection, e.g. famous collections like the Rothschild collection,” Uhl said. “What’s also important to note is that all of these pieces’ prices are based on auction prices, where dealers, curators [and] high-net-worth individuals all go head-to-head to find art for their own estate — or they are representing larger institutions such as the J. Paul Getty.”

“For most, this level of art collecting at that level is an act of investment and status,” Uhl continued. “After all, you’ll turn heads if you’re in ownership of the likes of Basquiat, Botticelli, Picasso, Rembrandt or da Vinci. Additionally, most of these pieces that are acquired by larger institutions at auctions, or loaned out to them by large family estates, are part of what makes it possible for the public to even see these works in museums and galleries.”

See: 20 Hobbies of the Rich Only They Can Afford

“Art tells a story, and part of each of these artworks isn’t just the art or the artist, but the history of acquisition,” Uhl said. “This narrative carries enormous weight and is part of how the cultural elite enjoys spending and investing their money. Blending the desire for that narrative with the desire for investing in high-quality art and in the monetary value that comes with it, these works carry value so long as the art world’s movers and shakers continue to elevate the artist and the artwork they created.”

Now that you’re more aware of the circumstances that drive up the value of art and what motivates people to buy these expensive paintings, here’s a look at the 10 most expensive pieces ever sold at auction.

Dated to circa 1500, Leonardo da Vinci’s “Salvator Mundi,” which depicts Jesus Christ, took the art world by storm in 2017 when it sold for a stupefying $450.3 million. According to Christie’s, the previous auction record for da Vinci was in 2001 for “Horse and Rider,” which sold for $11.4 million at Christie’s.

When Pablo Picasso’s 1955 painting “Les Femmes d’Alger (Version O)” — featuring a partially nude female accompanied by various geometric shapes — sold for $179.4 million at Christie’s in 2015, it achieved record-breaking status. According to a tweet from Christie’s at the time, “Pablo Picasso’s Les Femmes d’Alger (Version ‘O’) realized $179,365,000, a #worldauctionrecord for any work of art ever sold at auction.”

In 2015, Amedeo Modigliani’s 1917 painting “Nu Couché” sold for $170.4 million in a Christie’s auction. It is one of the 22 artworks in the nude series painted by Modigliani between 1916 and 1919. Modigliani’s nudes have a storied history. In the artist’s first and only solo exhibition that took place in Paris in 1917, the French police labeled his nude paintings obscene, and his show was shut down within just a few hours of its debut.

More: The Most Expensive Version of Everything

Another painting in Modigliani’s once-controversial nude series is his 1917 painting “Nu Couché (sur le côté gauche)” — also known as “nude lying on her left side,” which sold for $157.2 million in 2018. While it did not top the selling price of “Nu Couché,” it did set a record for the highest auction price in Sotheby’s history.

Francis Bacon’s 1969 painting “Three Studies of Lucian Freud” — a life-size, triptych format depicting Bacon’s friend Freud in animated style — sold for $142.4 million at a Christie’s auction in 2013. At the time, the piece broke the record for the most expensive piece of art ever auctioned.

Read: Breathtaking Sights Around the World You Can See for Free

Known as an iconic representation of human angst, Edvard Munch’s 1893 painting “The Scream” fetched $119.9 million at Christie’s in 2013. In 2021, during an infrared analysis of the painting to prepare the piece for an exhibition next year, officials at the National Museum of Norway found the words “could only have been painted by a madman” scribbled in pencil in the painting’s top left corner — words that they have since determined were written by the artist’s own hand.

Painted in 1905 during his Rose Period, Picasso’s “Young Girl With a Flower Basket” brought $115 million at a 2018 Christie’s auction. The story behind the painting is somewhat sordid. According to information on Christie’s website, the teenage subject’s name was Linda, and Picasso met her on the streets of Paris where she was selling flowers and sex.

See: 34 Things That Shouldn’t Be This Expensive

Claude Monet’s 1890 painting “Meules” — aka “Grainstacks” — sold for $110.7 million in 2019, which was the highest price ever for an Impressionist work, according to Sotheby’s. The piece was one of 25 in a series, featuring the same subject but focusing on different atmospheric conditions, which Monet painted between 1890 and 1891 in the fields of his homeland in France.

Jean-Michel Basquiat’s 1986 painting “Untitled” realized $110.5 million at a Sotheby’s sale in 2018. The painting, which prominently features the artist’s representation of a skull, was described by the auction house as “raw, uncensored and fiercely magnificent.”

More: 12 Most Expensive Meals in the World

Pablo Picasso’s 1932 painting “Nude, Green Leaves and Bust” sold in a 2010 Christie’s auction for $106.5 million. The painting is one of a 1932 series, all featuring the artist’s muse and mistress Marie-Thérèse Walter. At the time of sale, the piece broke the world record for any piece of previous artwork sold at auction, according to Christie’s.