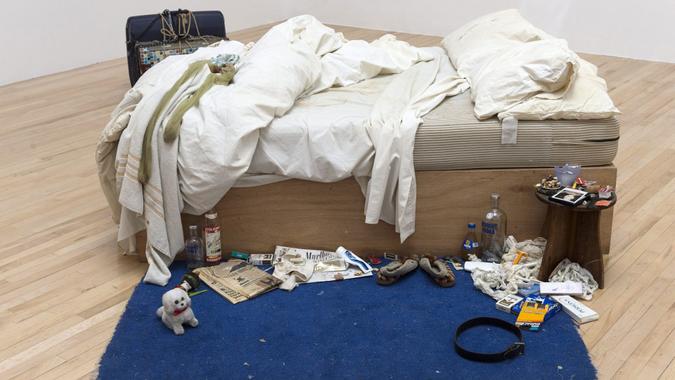 Incredibly rich people scarfing up incredibly pricy works of art isn’t a new phenomenon. For instance, a number of famous masterpieces created in the Renaissance era were commissioned by society’s most elite members, but lately, this historic trend has picked up steam — even during the pandemic. According to a new report from Art Basel and UBS that looked at the impact of COVID-19 on the gallery sector in the U.S., U.K. and China, spending on art wasn’t stifled by the economic downturn associated with the pandemic: 56% of collectors spent over $100,000 on art in the first half of 2020 and 16% spent over $1 million.

While buying art doesn’t have to be exclusively for rich people (hello, Etsy!), it often feels like it is. It sometimes seems like there is a clandestine competition among the wealthiest members of society to buy higher-priced art than the next person. Covert competitions or not, it is ironic that nothing pairs better with a poor and starving artist than a rich and sated collector.

These ambitious collectors also often favor the artist over the art, meaning they will buy absolutely anything that a renowned artist produces. At times it seems as though buyers are most interested in the most unique and even extravagant art. With that in mind, here’s a look at some of the strangest pieces of art that have sold for record prices.

In 2019, three buyers paid between $120,000 and $150,000 for limited-edition pieces of a work called “Comedian” by Maurizio Cattelan. The artwork, which featured a single banana and…not much else, sold at Art Basel in Miami Beach. An actual banana was also on display at the exhibit, duct-taped to a wall, but it didn’t last long. The “for display only” banana was taken down and eaten up by the performance artist David Datuna. He was escorted out of the building but no charges were pressed against him.

Learn: Is Art a Good Investment?

In 2008, over a period of just two evenings, Sotheby’s and Christie’s sold contemporary art worth more than $238 million. One of the pieces that sold was “Mirror Painting (Blood Red)” by Gerhard Richter. The pigment on glass work is, as its name implies, essentially a blood red mirror. The piece sold for $1.31 million.

See: The Most Expensive Version of Everything

Artist Tracey Emin memorialized her unmade bed because it was there that she had spent days heartbroken. The unkempt furnishing turned art installation sold for $4.35 million at a Christie’s art auction in 2014. The work of art, which featured, among other messy relics, a teeming ashtray and contraceptives, sold for more than $1.7 million over the anticipated price, CNN reported. Who bought the bed remains a mystery, but they surely can afford finer sleeping arrangements.

Tiny houses became a trend in part because they’re so inexpensive to build and maintain. But this tiny house from Yoshitomo Nara most assuredly is neither. The art installation is a 2.6-meter-tall wooden house with two accompanying paintings (“Hothouse Doll” and “Three Sisters (Berlin Version)”). The oddly creepy yet beautiful artwork fetched $15.5 million at Poly Auction Hong Kong’s Modern and Contemporary Art Sale in April. It’s a particularly significant price when you consider that the entire auction, which sold 86 pieces, scored $34 million. Though this is the highest price this particular artwork has sold for, it’s not the most a Nara work has gone for: The painting “Knife Behind Back” sold for $24.9 million back in 2019.

In October of 2020, a 67 million-year-old Tyrannosaurus rex skeleton named “Stan” was up for auction at Christie’s. After a 10-minute bidding period, it sold for $31.8 million. The sale of the 39-foot-long dinosaur infuriated scientists as they may lose Stan (who would probably be better off in a museum) forever.

Discover: The Most Fascinating Things You Never Knew You Could Invest In

While many of us are still in the dark as to what an NFT (non-fungible token) is, investors are scooping up these digital art verification pieces. Back in October at a Christie’s auction, an NFT called ‘EVERYDAYS: THE FIRST 5000 DAYS’ by the digital artist known as Beeple sold for a record-smashing $69 million. The basis of the art is actually (or fortunately) pretty interesting: In May 2007, Beeple created and shared online a new work of art every day and did this for 5,000 consecutive days. Collectively, the 5,000 works of art form this NFT.

More: The Buyer of Christie’s $69 Million Beeple NFT Was Ready To Bid Higher

Jeff Koons is no stranger to selling an artwork for tens of millions of dollars. In 2013 his “Balloon Dog (Orange)” sold for $58.4 million at a Christie’s auction. In 2019, he shattered that record (but thankfully not the sculpture) with “Silver Bunny,” a 3-foot tall silver replica of a rabbit that was stylistically similar to “Balloon Dog” with its mirroring effects. “Silver Bunny” sold for $91 million in 2019 at Christie’s Auction House — the most expensive piece of art to sell by a living artist to date.